Not even the 205-pounders could put the first finish of the night on the board, as Klidson Abreu narrowly edged Sam Alvey on the scorecards at UFC San Antonio.

Sam Alvey’s move to light heavyweight has produced mixed results. The fan-favorite won his first two bouts, but had since lost back-to-back bouts heading into UFC San Antonio. He was TKO’d in the second round by Antonio Rogerio Nogueira last September, and then TKO’d in the first round by Jimmy Crute in February. The 33-year-old has been with the promotion since 2014, but if he couldn’t turn things around in the relatively shallow UFC light heavyweight division, that may change.

Klidson Abreu likely has a bit more rope when it comes to his UFC status, for now. He fought for the second time in the promotion at UFC San Antonio. In his debut in February, Abreu lost a unanimous decision to Magomed Ankalaev. There’s no shame in that, but earning that first UFC victory is a big deal for every fighter. He was hoping to get that win sooner rather than later on Saturday night.

The fight got going at 205-pounds between Sam Alvey and Klidson Abreu, and unsurprisingly enough, Abreu took the center in search of holes in Alvey’s defense. Alvey began to attempt to lure Abreu into a staring contest. But the Brazilian promptly fired a calf kick to let Alvey know he was there to fight. They clinched, and Abreu delivered a knee below the belt of Alvey. Alvey did what he conventionally does in all of his fights thus far, going right back to his matador-esque style circling on the outside while looking to counter.

Alvey initiated the clinch with just north of 90 ticks to go in the opening stanza. Abreu landed a big kick to the body. The Braziilian found a rythym heading into the waning moments of the opening round. Abreu stung Alvey with a right hand. Alvey looked bothered for a moment. Alvey may have truly been dazed by that right hook from Abreu, as he errantly rushed into the pocket and engaged in a furious flurry to draw the round out to a close. Abreu seemingly landed a knee egregiously late. The replay confirmed it indeed did land on Alvey clean after the bell had sounded.

Cageside Press scores the round 10-9 for Abreu

Round two got underway with more of the same. Abreu however was less aggressive to start that round. Abreu landed a big knee at close range, and a right hand to capitalize off of it. The Brazilian suddenly seemed to be in control of this fight now, making Alvey bring the fight to him. Opposite of the manner in which the fight had unfolded to that point. After a couple of whiffed shots from both parties, and Abreu crashed in to look to get this fight to the mat, which he did.

A scramble ensued, and Abreu had his hooks in place as he looks to take the back. The Brazilian threatened an arm-triangle before losing grip of the choke and eating a couple of heavy shots from top position from Alvey. The one minute mark of round two passed by, and the two fighters were back up to their feet. Alvey latched on tight and got the clinch where he wanted it. With Abreu’s back to the fence as he ate a thunderous knee to the midsection from Alvey. They broke, and reset in the center of the octagon where a staring contest ultimately ensued for the leftover ten seconds and change of round two.

Cageside Press scores the round 10-9 for Abreu

Third and final round begian as Alvey got things started with a kick to the lead leg of Abreu. Abreu threatens with a couple more kicks, one to the body that lands, one to the head that Alvey ultimately refuted. Abreu went downstairs to the lead leg instead of Alvey, and Alvey takes yet another minute to continued to look for his countershot. Another kick of near devastating proportion from Abreu was barely blocked by Alvey. As we approached three minutes remaining in the light heavyweight bout. Abreu missed on a flying knee, and ate a right hand as a result before landing one of his own for good measure. They traded power shots again, as they came up on two minutes remaining in the fight.

Alvey landed a big right hand off a blistering exchange. Potentially his biggest punch of the fight to that point. Ninety seconds remained, and Abreu’s errant takedown attempt was reversed into the clinch with Alvey pressed up with Abreu’s back to the fence. Abreu thought about a knee on the break, but thought better of it. Alvey got a right hand to score. Abreu landed a couple of his own on the comeback. In the final ten seconds of the fight, Alvey and Abreu did a lot more of swinging and missing than actually landing, as the card card awaited it’s fifth consecutive judge’s decision. 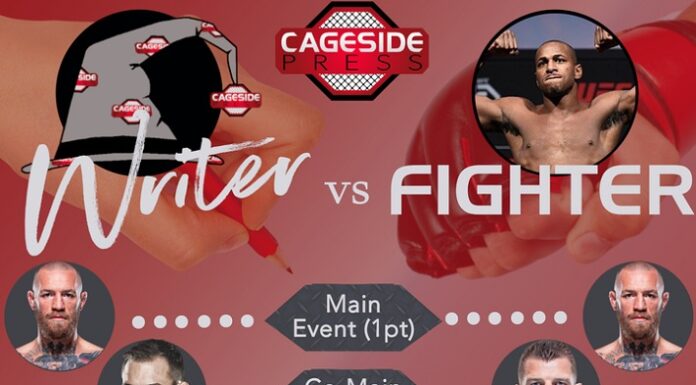