Ray Borg and Raquel Pennington will be among the fighters to keep an eye on at Friday’s official weigh-in for UFC San Antonio.

Rafael Dos Anjos is a UFC staple. Dos Anjos has fought all of the biggest names in the sport and has captured the title at lightweight. Dos Anjos fell off, immediately after losing his 155lb title and decided that making the weight was becoming too challenging. RDA ultimately decided to move up in weight. This was a bold decision because Dos Anjos is only 5’8″ with a 70″ reach, pretty bellow average to undersized for the lightweight and especially the welterweight division. So far RDA has looked good at 170lbs, fully embracing his gatekeeper role as he always seems to be just outside of the title shot conversation. At least now RDA is accomplishing this accolades while at a way healthier and natural weight class for his body type.

Raquel Pennington has been on a cold streak since challenging Amanda Nunes for the UFC women’s bantamweight belt in May of 2018. Raquel was brutally beaten for 5 rounds before finally being finished in the very last round. The kind of beating that has the potential to change the trajectory of a career. In her next fight Pennington lost to Germaine de Randamie by unanimous decision just months later. Rocky missed weight for this fight, something she has never done before. Pennington is 5’7″ tall and possesses a 67.5″ reach. At 30 years old Pennington could very well be reaching the point in her life where the human body just holds on to a few extra pounds and she might be unable to shed the extra weight that it takes her to make it down to the bantamweight division. In order to make another run at the belt she needs to find the weight class that her body is the healthiest to win a fist fight in.

Ray Borg has missed weight numerous times. Borg has struggled with making weight since he entered the UFC and has had an especially rough time not just in his professional fighting career but in life in general over the course of the past couple years. Ray has had a bunch of fights canceled during this time period as well. After losing to Demetrious Johnson in a spectacular fight Ray’s bad luck struck inside and outside of the cage keeping him out of competition for a year and a half. In Borg’s most recent fight he lost a unanimous decision to Casey Kennedy back in March of this year. For this fight Borg finally moved up to bantamweight, but again missed weight. At only 25, Borg is a young and dangerous fighter that still has a lot left in the tank and if he can get his weight to where it needs to be the rest should fall into place. 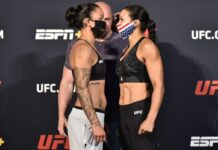 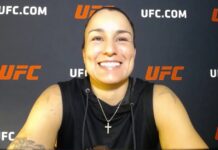