The first round matchups of the highly-anticipated Bellator Featherweight Grand Prix has been announced, and all eight bouts will take place in September.

The fights have been split evenly between September 7 and September 28. The bouts are as follows:

Similar to the Welterweight Grand Prix, champion Patricio Pitbull will defend his title throughout the tournament in five-round bouts. That starts when he takes on top contender Juan Archuleta on September 28.

Former UFC featherweight Sam Sicilia will fight Pedro Carvalho. Sicilia is 2-1 since leaving the UFC, defeating Derek Campos most recently. Carvalho is a Portuguese prospect who is on a five-fight win streak, knocking out Campos in May.

Two-time champion Daniel Straus takes on Derek Campos. Straus returned from a near-two-year layoff in March when he submitted Shane Kruchten. Campos has an 8-7 record in Bellator, and comes in on a three-fight losing streak, with the last two being his first in the featherweight division.

Two-time featherweight champion Pat Curran will battle the undefeated Hungarian Adam Borics. Curran has been with the promotion since 2010 and recently had a three-fight win streak snapped by AJ McKee. Borics is 4-0 in Bellator and is coming off a huge flying knee KO against Aaron Pico.

AJ Mckee is one of the promotion’s hot commodities, going 14-0 in his career without ever fighting in a different organization. He’ll take on Georgi Karakhanyan, who is a former WSOF champion with a 4-5 record in the promotion since 2010.

Darrion Caldwell recently lost his bantamweight title to Kyoji Horiguchi, and will look to bounce back one division higher against Henry Corrales. Corrales has won five-straight fights since moving to The MMA Lab, including a first-round knockout against Aaron Pico.

Lastly, Daniel Weichel faces Saul Rogers. Weichel is 7-3 with the promotion and has fought for the title twice. He’ll be looking to bounce back from a pair of split decision losses. Saul Rogers is a promising fighter who was a finalist on The Ultimate Fighter, but visa issues kept him out of the UFC. He is 13-2 in his career and successfully made his promotional debut in May.

Bellator 226 takes place on September 7 in the SAP Center in San Jose, California, and is headlined by Ryan Bader vs. Cheick Kongo for the heavyweight title. Bellator 228 goes down three weeks later, in The Forum in Los Angeles. All Bellator Featherweight Grand Prix bouts will air exclusively on DAZN. 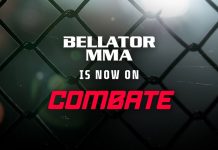