Benito Lopez survived an early knockdown and used his kicks to defeat Vince Morales by unanimous decision at UFC Sacramento.

In the opening bout of UFC Sacramento, Benito Lopez faced Vince Morales in a bantamweight contest.

Lopez (9-1) is coming off the first loss of his career to fellow prospect Manny Bermudez. Bermudez submitted Lopez with a Guillotine choke in the very first round. His only other UFC contest was a close decision victory over Albert Morales. Going into UFC Sacramento, Lopez looks to get his second UFC win over a second Morales.

Morales (9-3) most recently defeated Aiemann Zahabi via unanimous decision in May (check out post-fight his interview with us here). The 28-year-old steps up for Martin Day on a couple weeks notice. Morales is also 1-1 in the UFC, losing a decision to Lopez’s teammate, Yadong Song.

Both men hurried to the middle to start the fight. Lopez missed a head kick, but landed an outside leg kick. He then landed a body kick to the left side of Morales. Lopez has landed kicks consistently throughout the opening two minutes of the first round. Morales attempted his own combination, but Lopez defended well.

Lopez almost landed a head kick, but Morales managed to block. He continued with his leg attacks, as Morales didn’t attempt to check them during the opening round. The calf of Morales was bright red after the several leg attacks of Lopez. Morales landed a big right hand that dropped Lopez. Lopez defended well on the ground after being rocked, and the round ended shortly after.

Cageside Press scored the round 10-9 Lopez

Both men were eager to start the second round. Lopez landed the outside low kick once again. Lopez pressed Morales towards the fence as Morales fired a low kick. Morales then landed a combination. Lopez landed an inside leg kick this time, which was followed by a spinning back kick to the body. Morales looked for the right hand again but Lopez avoided it that time. Lopez then fainted with the flying knee. Morales rushed with a combination that landed. Shortly thereafter, Lopez looked for a head kick that partially connected. Lopez landed another leg kick once again. Morales landed a right hand once again, as he became the aggressor towards the end of the round. Lopez looked for a head kick to end the round.

Cageside Press scored the round 10-9 Lopez

Morales opened up with his own kick to start the third round. He then blasted forward with his hands but Lopez defended well. Lopez landed another leg kick once again. Morales landed several power shots up close with his hands. Lopez looked to land a flying knee but Morales saw it coming. Morales had success with his boxing flurries against Lopez, where he landed several shots up close. Morales looked to set up the right hand all night, it was his key weapon. Meanwhile, Lopez continued to land his kicks in the third round. Both men traded up close but Morales looked to get the better of the exchange. Lopez ended the fight with a high kick. Close, back-and-forth battle. 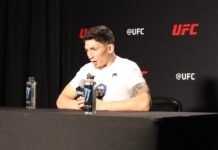 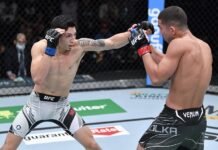