John Howard has been on a roller coaster career-wise of late, but was back in the winner’s circle in a big way at PFL 4 2019 in Atlantic City on Thursday.

Atlantic City, NJ — On a night full of finishes, perhaps none resonated more than John Howard’s knockout of Ray Cooper III at PFL 4 2019 on Thursday in Atlantic City. While it was ruled a TKO, the few extra strikes that came as Cooper hit the floor were merely mechanical, Howard’s training taking over.

Cooper was out, Howard was redeemed following a loss to Magomed Magomedkerimov earlier in the season.

“I actually envisioned a second round finish,” he admitted. If it wasn’t the knockout, Howard foresaw a submission. “[Cooper] taking us down, that surprised me.” However, his coach suggested it might happen. “That shows he respected my striking, but we also thought if he stayed in the pocket long enough, and I was smart, I could catch him, and we did it.”

In the end, “it was a situation where who’s faster, more smarter at that point,” that dictated who came out on top. “Basically we’re just swinging. And my left hook was just a lot more faster. I’m real comfortable with my left hook, I finish most of my opponents with my left hook, and he stood right in front of me.” Which took ‘Doomsday’ by surprise. “When I caught him, I was shocked. That’s why I went to the ground to ground n’ pound him. But he stood back up. When he stood back up, I just jumped in with the left hook and caught him.”

The second time, there was no coming back for Ray Cooper III. “It’s amazing. It was amazing to knock out Ray Cooper. First of all I have to say I have nothing but respect for him. I think he’s a younger version of me. He’s just as powerful, just as aggressive. To catch him like that was amazing. It was just one of those things that was like ‘wow this really happened.'”

“I don’t know if you saw after the fight, I went to his corner, and I bowed to his corner, his father,” Howard added. “This was a fight I didn’t want, because I knew it would go this way. I like Ray personally, he’s a real good guy, we’ve always talked behind the scenes. When we got matched up, it was like ‘nothing personal, but business is business.'”

That’s the fight game. Or better yet, the sport of mixed martial arts, something Howard touched on later. ‘Doomsday’ would talk about what the PFL is doing for the MMA community, changing perceptions as far as mixed martial arts being a sport.

“I’m sick of being called cockfighters, we’re not only cage fighters,” Howard exclaimed. “We’re professional athletes. I have a saying, just like there’s the NFL, we’re the PFL now. So we’re looked at more as athletes, million dollar athletes. It’s about time, and I thank the PFL for that.”

Looking ahead to the opening round of the playoffs, Howard gave Cageside Press his thoughts on opponent David Michaud. “I think he’s tough, I can’t overlook anybody. Obviously he did real good, he finished his opponent too,” Howard observed. “Definitely it’s going to be a tough fight, we’re going to look at more footage and see what we’re going to do. But like I said you can’t overlook anybody, just go forth with another game plan and another fight.”

His tough exit from the playoffs last year, off a No Contest and Tie-Breaker, may give him an edge heading into the PFL 2019 post-season.

“The best thing I can take from that is, sometimes things happen for a reason. I think one, it definitely makes for a good story, at least I think so,” Howard explained. “And two, I like to show the world that even when you’re down and out, and fate is not in your favor, just don’t stop, keep moving forward.”

“I think I displayed that, especially tonight, that even though I had the odds against me, even though last year that situation happened, there’s always a way to come back,” he continued. “Even though I was down and out with that situation, I came back. Tonight was my way to come back and be who I am. I didn’t let that stop me, I didn’t let that frustrate me, to not keep going for what I wanted to go for. I kept going forward. You keep going forward, I got the result I got tonight.”

Speaking earlier in the night, Michaud suggested he might take a cautious approach to the first playoff fight, which will be just two rounds. Fall back on his wrestling, and make sure he wins the first round, which dictates the winner in the event of a tie.

Ask if his own approach might change, Howard said things might go “a little bit differently. Depends on my opponent. I’ve got to talk to my coaches and strategize. We’ve got a strategy for the whole situation. What I do is I trust my cornermen, and do their strategy, and what we come up with, I’m good to go with that.” 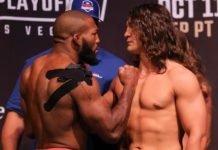 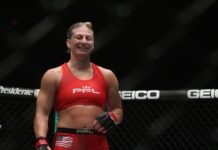