Despite her fight at PFL 4 2019 being scratched, Sarah Kaufman is leaving Atlantic City with both her show and win money, which left her buzzing about the PFL and how well it treats fighters.

Despite the mishap, Kaufman (21–4 (1)) stuck around for the show, appearing on the broadcast, and speaking to media outlets including Cageside Press following the event.

Every cloud has a silver lining, and in this case, it’s Kaufman moving forward in the tournament. Looking ahead to the post-season, the Canadian isn’t worried about opponent Larissa Pacheco missing weight. “I know Larissa is a professional, she’s been in the sport for a long time. I actually think aside from me, she’s the toughest, most well-rounded competitor in the women’s lightweight division,” Kaufman said following the fourth show of the PFL’s 2019 season. “So I’m really looking forward to having an opportunity to fight her. I’m definitely not looking past her, she’s a tough fight, she definitely gave Kayla [Harrison] a tough fight at PFL 1. But really that million dollars is the goal, that’s what I’ve been watching, that’s what I’ve been looking forward to since signing with the PFL.”

While making an appearance in the cage during the event, Kaufman didn’t exactly get the warmest of welcomes — perhaps thanks to rival Kayla Harrison having just won her second fight of the season. “The crowd booed me. You can’t boo Canadians, we’re just too nice for that!” Kaufman joked.

On a more serious note, Kaufman addressed what the PFL brings to the table. “The million dollars of course is a huge talking point, everyone’s been talking about the equal pay, having the fact that there’s the females in the PFL making the same as the males and their five divisions,” said Kaufman. “PFL’s just a very progressive league, they’re doing a great job, I’m very happy to be fighting for them.”

Later, Kaufman recounted the roller coaster ride that was Fight Week in Atlantic City — and luckily, her fight falling apart wasn’t as much of a blow as it could have been.

“I’ve had other fights fall out a few days before, I’ve never had a fight not happen at the weigh-ins. And I’ve been really devastated these other times,” Kaufman explained. “But I think because of the PFL format, knowing I’m supported, I’m paid, I get my points, I was set to be in the playoffs no matter what, and then I have the fight to look forward to in October, in December — I’m actually mentally as good as I can be.”

“I’m not devastated, I’m not super upset,” she continued. “I’m disappointed that tonight, that when the second fight was on, that’s my timeslot. I wanted to be fighting, I wanted to show the world once again why I’m going to win the million dollars.” Kaufman had hoped to put her skills on display, and for “the other people in the division to see that and get a little more fear in them. But now there’s a little more mystery if you will as to my skill set and what I’m going to bring to the table.”

With the way the women’s lightweight division was built, from the onset, fans were anticipating a Kalya Harrison vs. Sarah Kaufman showdown at some point. While Kaufman first has Pacheco to contend with, she gave her thoughts on Harrison’s performance Thursday.

“Kayla looked great. I fought Morgan as well – in case you didn’t notice I did finish her a little bit quicker,” Kaufman joked.

More seriously, she added that “I thought that Kayla looked really good. I thought she looked composed, I thought she looked composed in the Larissa Pacheco fight as well. She got dominant position, she worked her way through, had a lot of patience, and showed a lot of restraint. So good job to her.” In the final four, Kaufman will get Pacheco, while Harrison is set to fight Genah Fabian. “I wasn’t sure if actually [Harrison] would try to make it go longer because she didn’t want to fight Larissa again, because that is a possibility with the point structure, and maybe she didn’t want that tough fight. But either way, however it’s happened, I thought that she looked good.”

“And I would have looked amazing,” Kaufman quipped. “I mean I do, again, I’ve been working on my tan while I’ve been here.” Only a shade darker than the PFL’s white logo behind her, Kaufman may have more work to do in that department.

If Kaufman seems a bit jovial for someone who had a fight fall through just a day earlier, there was good reason. As standard practice, the league was paying out both her show and win money, despite Samad missing weight.

“PFL is definitely the organization that has treated me the best of any organization I’ve ever fought for,” Kaufman revealed. “I’ve fought for some amazing ones, but just the fact that PFL is paying both the show and win money, that is unprecedented.”

That said, Kaufman had to admit that losing out on her fight was still a bummer. “I don’t enjoy sun, I don’t enjoy drinking, I don’t enjoy gambling, I don’t enjoy shopping,” she noted. And so Atlantic City had little to offer her. “I enjoy fighting. That’s what I was here for. It’s really disappointing that I didn’t get to fight. But I did get to speak to a lot of media, I got to be live on the air with Caroline [Pearce] quite a lot, showing my message and being part of the PFL production. So that was great, but I was here to fight. I’m looking forward to going home and training.” 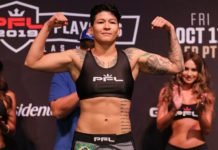 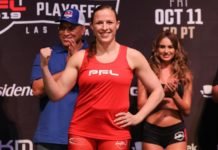