UFC 239’s ESPN prelims began with a bantamweight bout between Alejandro Perez and Song Yadong, where Song picked up the biggest win of his career.

Going into UFC 239, Alejandro Perez was coming off a loss to Cody Stamann in March at UFC 235. However prior that, he was riding a wave of a seven-fight unbeaten streak. Along the way, he defeated some notable names such as Luri Alcantara, Andre Soukhamthath, and former WEC bantamweight champion Eddie Wineland.

Song Yadong, on the other hand, came in on a six-fight winning streak, including three wins in the UFC. His last win was a unanimous decision victory over Vince Morales in China last November. This bout against Perez was originally scheduled for UFC 235, however, Song was forced to pullout with an injury and was replaced by Stamann.

As the bout kicked off, Song Yadong kept on landing some really nice counters early in the first round. He landed a big left hook early in the round that shook Perez. That hook was a sign of things to come, as after a few minutes of exchanging, Yadong landed a giant right hook as Perez stepped in for an inside leg kick that put Perez out cold, giving the 21-year-old Song the biggest win of his career.

Yadong has a lot of potential at bantamweight, as he’s shown the ability to win fights anywhere, and with a win over Perez, he should get a place in the rankings next week. Plus at the young age of 21, he still has many years to grow. Tonight may just be the start of something great for the young Chinese fighter. 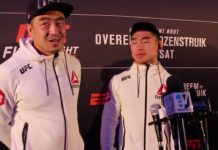 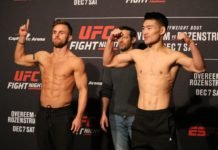 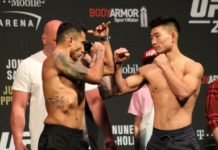 UFC Washington’s Song Yadong: The Next Asian Force to Look Out For