From Three Piece and a Soda to Jesus Jorge, UFC welterweight Jorge Masvidal has inspired some crazy memes — but he’s ready to get down to business against Ben Askren at UFC 239 this weekend.

Las Vegas, NV — Jorge Masvidal returns to action at UFC 239 this weekend, with the gritty welterweight taking on the undefeated Ben Askren. The pair’s styles could not be more different, with Askren being outspoken and occasionally downright goofy, while Masvidal seems to be all about business.

That’s not to say he doesn’t have his humorous side, however. And it was on display when Cageside Press got his reaction to the “Jesus Jorge” meme ahead of this weekend’s big event.

His reaction was, to say the least, entertaining. “I’m not too much online, so I don’t see these things until like this moment happens, and somebody shows it to me,” Masvidal told us. Fair enough — how often does anyone go out looking for memes of themselves? However, the Jesus meme has come up before. “The craziest thing I’ve seen, one of the reporters came up to me, and this threw me in a loop, this was pretty hectic. She had a necklace with me on it.”

“I’m not Jesus in any way, shape, or form and I don’t want nobody to hate me because people are doing these memes,” Masvidal added, “because I’m not God or Jesus, nothing like that.”

He is, however, “baptizing people with these hands,” despite not being a deity. Next up, Ben Askren. And should Masvidal get past him, who knows. The title picture at welterweight is anyone’s guess. Colby Covington had the interim title until he didn’t. He had the next shot at Kamaru Usman until he didn’t. Now, Covington, a teammate of of Masvidal, is fighting Robbie Lawler.

In fact, Jorge Masvidal could find himself with a title shot off a win over Askren, especially given his knockout of Darren Till just months ago. Should it happen, Masvidal doesn’t foresee too many issues with teammate Covington.

“There’s no beef man, not from my side at least. I’m sure emotions could come up if I got the title shot. But there’s no beef, man.” Yet having said that, Masvidal pointed out, quite rightly, that MMA isn’t exactly a team sport at the end of the day.

“I didn’t get into this sport to high five with nobody. I got into the sport because I loved it. Then two miracles happened, my kids, and I saw I could provide a living, and a good living for my kids based off my talents.” That knowledge keeps him focused. “I’m going to sharpen my tools as sharp as I can get them and go to war with whoever they put in front of me. So if it’s Colby, or whoever it is, when it comes to that title, there’s no ‘oh I’m not going to fight so and so.’ That doesn’t exist, you know?”

In other words, even teammates might collide if the belt is on the line.

First up, however, is Ben Askren. For whom the game plan is simple. “I hurt him. I hurt him and change his life.”

Watch the full interview from with Jorge Masvidal from the UFC 239 media day above! 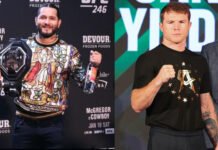