We got to know more about the current M-1 Challenge flyweight champion, Ukranian prospect Aleksander Doskalchuk.

Aleksander Doskalchuk started in Pankration and found success, becoming a champion in the sport. Pankration has similar rules to MMA, which is a combination of wrestling and boxing. That experience led to Doskalchuk making his transition to MMA in 2011. Born and living in Chernivtsi, Ukraine, for most his life, a few months ago, he moved to Irpin, which is near Kiev. He made his professional debut in July of 2013. After a pair of losses near the beginning of his career, Doskalchuk is now on a seven-fight win streak. He fought the beginning of his career in his home county of Ukraine but his last four fights have been in Ingushetia and Russia. In September of 2017, Doskalchuk captured the M-1 Challenge flyweight championship. To this day, he still has the title and has defended twice. 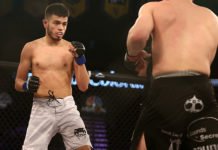