Francis Ngannou once-again finished a former UFC heavyweight champion in the first round, and is now on the verge of another title shot, after defeating Junior dos Santos at UFC Minneapolis.

Bouncing back from the first two losses of his career, Francis Ngannou responded with back-to-back first-round finishes. Stopping Curtis Blaydes and Cain Velasquez within a minute each, the Ngannou bandwagon is beginning to fill-up once again. He’s already fought for the UFC heavyweight title once, and with another win at UFC Minneapolis, could be ready for another shot at the belt.

Junior dos Santos feels he’s nearing a title-shot as well. Riding a three-fight winning streak going into UFC Minneapolis, the former champ is pushing for his third crack at UFC heavyweight gold since he lost his belt to Cain Velasquez at UFC 155. Given the landscape of the division, stringing four victories in a row would give him as good an argument as anyone.

Ngannou opened up with a big leg kick to some surprise. Dos Santos would then drop Ngannou with a leg kick of his own. Ngannou then landed a big right hand that earned some cheer from the audience. Dos Santos stepped in with a big overhand left that he missed. As he was missing, Ngannou landed a shot of his own behind the ear, that stumbled dos Santos. JDS then turned his back, and Ngannou snuck an uppercut in that dropped Dos Santos. Some ground strikes later, Ngannou had a first-round knockout win.

Francis Ngannou’s resume reads like a future UFC Hall of Fame list. Wins over Arlovski, Overeem, Blaydes, Velasquez, and now Dos Santos had all come in the first round. Ngannou was on the verge of a three-fight losing streak last year. He’s now on the verge of a UFC title shot and should get a title shot against the winner of Cormier and Miocic’s rematch in August. 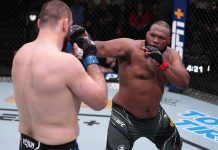