Joseph Benavidez staked his claim for another title-shot, finishing Jussier Formiga in the second round at UFC Minneapolis.

Jussier Formiga has been in the UFC flyweight title-picture since he joined the promotion in 2012. Consistently fighting the best of the best at 125-pounds, the Brazilian has managed to fall just short of earning his first UFC title fight appearance several times. Although the future of the weight class in uncertain, a victory for Formiga at UFC Minneapolis (his fifth in a row) would undeniably make him the next contender for Henry Cejudo to battle at flyweight.

Joseph Benavidez has had a couple of cracks at the UFC flyweight title already. Since his last title-fight, Benavidez has been stacking up wins. He’s 8-1 in his last 9 bouts, and was on a two-fight winning streak going into UFC Minneapolis. While Formiga may have racked up more wins without losing of late, Benavidez already holds a key victory over flyweight title-holder Cejudo. That wouldn’t mean much though, with a loss to Formiga.

Round one was an interesting round on the feet. The most damaging strike of the round was a punch that opened a cut right on Benavidez’s left eye. That didn’t stop Benavidez from throwing a variety of strikes throughout the first five minutes. But, it did do some damage, and had Benavidez wiping his eye throughout the first round many times. There were some interesting scrambles as well, through a close first round.

Earlier this month after Henry Cejudo’s win over Marlon Moraes, Dana White announced the flyweight division would stick around. It seems that Cejudo may now have his next challenger in a familiar foe in Joseph Benavidez.

Joseph Benavidez def. Jussier Formiga by TKO (head kick and punches) in Round 2 (4:47) 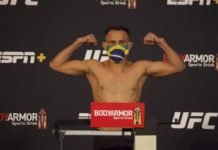