Drew Dober showcased his power with a first round knockout victory over Marco Polo Reyes at UFC Minneapolis.

Even though he’s only 30-years-old, it feels like Drew Dober has been in the UFC forever. He joined the promotion in 2013, after losing out in the entry round of The Ultimate Fighter 15 in 2012. He’s racked up a 6-5 (1) record in that time, showing better results of late. He’s 3-1 in his last four bouts, but was coming off of a second-round submission loss to Beneil Dariush at UFC Wichita earlier this year.

Marco Polo Reyes took a loss in his last bout earlier this year as well. The 34-year-old was TKOd in the second round by Damir Hadzovic in February. Over the course of his six fight UFC career, the Mexican is 4-2, but has tallied one win in his last three bouts. He’s not lacking in excitement though, as three of his six UFC bouts have earned him a Performance of the Night bonus.

Dober came out on the front foot, landing a series of heavy punches, dropping Reyes around the 30 second mark. Reyes survived momentarily and got back to his feet. But Dober landed another few hard lefts, and Reyes was out on the canvas after 67 seconds. 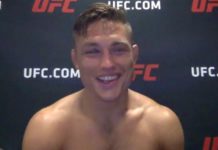 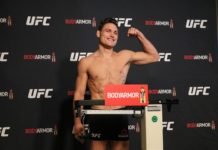