After two years away from the cage, Melvin Manhoef proved he was still dangerous at Bellator London, knocking down opponent Kent Kauppinen more than once.

Feared striker Melvin Manhoef returned to the Bellator cage for the first time since 2017 at Bellator London on Saturday. A new deal in hand, it was a highly anticipated return, and came against Kent Kauppinen. While little known prior, Kauppinen became the man of the moment when he finished Alessio Sakara in the main event of Bellator 211 in Genoa, Italy last year.

In London, Manhoef and Kauppinen did a lot of feeling out early, Manhoef on the outside. Kauppinen fired a leg kick, later, a jab. When Manhoef attacked, it was a high kick, shoulder level. Not too far in, Kauppinen would land a combination that knocked Manhoef down. That certainly was a huge opportunity, but the veteran survived. They’d stay on the feet, trading off and on. Kauppinen would have to eat a big blow at the end of the first, which saw Manhoef get on top and land some ground n’ pound, then try for a choke only to give up position. That right hand had some serious power behind it; Manhoef certainly still had that. The bell sounded, and they’d head to a second round.

A short left hook would have Kauppinen in trouble early in the second. He went down, and Manhoef got into guard. However, as with the late knockdown in the first, Melvin could not finish. They’d go back to the feet, working there until Manhoef got on top again with two minutes remaining in the second. Kauppinen was bloodied. He’d survive to make it back to the feet, the pair squaring up in the final minute. Kauppinen chopped at his opponent’s lead leg. But couldn’t switch into high gear.

Round three started with a measured pace, but the two would soon trade kicks. Manhoef to the body, while Kauppinen continued to favor leg kicks more than any others. Manhoef was on the outside; Kauppinen looking for a way in. When he did close the distance, he fired a powerful uppercut, but hit only air, as Manhoef had already moved. Manhoef’s output had slowed, however, and Kauppinen had a chance to change the momentum of the fight.  Unfortunately, he could not capitalized, and Manhoef held on for the win.

While it wasn’t the knockout many hoped for, it put Manhoef back in the win column after a pair of title-fight losses to then-champ Rafael Carvalho. 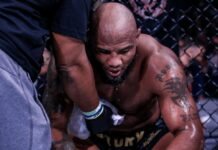