Lyoto Machida got a big finish win over Chael Sonnen in the Bellator 222 co-main event.

“The American Gangster” is moving back down to light-heavyweight after a brief heavyweight bid during the Bellator heavyweight Grand-Prix. His run ended after a dominating defeat at the hands of Fedor Emelianenko via TKO in October. Prior to that, he was coming off of two straight wins over Rampage Jackson and Wanderlei Silva.

Lyoto Machida just made his foray into Bellator this past December, defeating Rafael Carvalho via split decision. He left the UFC before that on a two-fight winning streak, defeating Eryk Anders and Vitor Belfort on the way out, before signing with Bellator MMA.

Round one started fast with Chael closing the distance quickly as he looked for the takedown. He would get the trip takedown, and get the back as well. Machida would shake Sonnen off and the two would get back to the feet, Sonnen got the clinch but Machida would shake him off. Sonnen would go to shoot for a takedown and get hit with a flying knee by Machida, and would go down. Machida would land some brutal ground strikes but Sonnen would find his way into round two.

Chael Sonnen after surviving a brutal flying knee in the first, would then take a flying knee to open the second round. This time, Sonnen wouldn’t recover. Machida landed some big hammer fists and that was enough for the referee to wave off the fight. What a performance by Machida.

The Flying Knee did the trick for @lyotomachidafw 💪#Bellator222 pic.twitter.com/UJEocCqWnT

Lyoto Machida unleashed his best performance in years against Sonnen, and will likely soon be in line for a title shot. As for Sonnen, this is his second TKO loss in a row. That streak won’t get worse, as he retired in the cage.

The ride is over. @ChaelSonnen announces that he is retiring. ✊ pic.twitter.com/kNMQEIdIKq

Lyoto Machida def. Chael Sonnen by TKO (Flying Knee and Punches) in Round 2 (0:22) 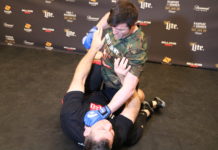 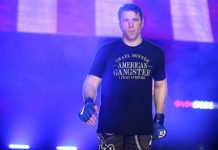