Patrick Mix got a quick submission finish over the young Ricky Bandejas at Bellator 222, winning by rear-naked choke in just over a minute.

Going into this battle of prospects, Ricky Bandejas was coming off a tough decision loss to Juan Archuleta in January. However, prior that loss, he had gained the biggest win of his career, knocking out the much-hyped James Gallagher in the first round.

Patrick Mix, on the other hand, is undefeated through 10 bouts. The 25-year-old is a submission ace, having won six of his ten fights by way of submission, last defeating Turrell Galloway at KOTC in February. He also holds submission victories over UFC fighter Andre Ewell and top prospect Tony Gravely. We would see his submission ability early against the young Bandejas.

Patrick Mix started the fight quickly and got Bandejas’ back. As he got the back while standing up, he looked to lock in the rear-naked choke, and he quickly worked the choke in. Bandejas fell backward as Mix completely locked the choke in, and he got the tap. A fast start, and a fast finish for Patrick Mix in his promotional debut.

Patrick Mix immediately put himself on the map in his Bellator debut, and if his debut is any indication, he’s going to be a problem for many fighters in the Bellator bantamweight division for years to come. 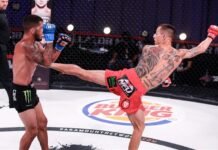 Bellator 249: Ricky Bandejas Can’t Wait to Mix It Up with “Top Prospects” Bellator Has Signed