A pair of women’s 125lb’ers will look to continue their recent success as Maryna Moroz faces Poliana Botelho at UFC 241.

UFC 241 has added another scrap to its card as Poliana Botelho and Maryna Moroz are set to face off in a women’s flyweight bout. The fight takes place in Anaheim, California at the Honda Center on August 17.

Poliana Botelho is coming off of a win at UFC 236 in April. There, Botelho took a unanimous decision win over Lauren Mueller. She is currently 3-1 in the UFC with her lone loss to Cynthia Calvillo. She will look to get her win streak back in the fight with Moroz.

Maryna Moroz is coming off of a win as well. In March, Moroz secured a decision victory over Sabina Mazo that snapped a two fight skid. Maryna Moroz took two losses to Angela Hill and Carla Esparza during her losing streak.

Moroz will look to capitalize on the fifteenth ranked Botelho in the bout. Getting a win over a ranked opponent will surely put her in a good spot for a top ten opponent. With the women’s flyweight division being so new, the fight between Botelho and Moroz will do good to flesh out the division and get a keen eye on who the contenders are.

UFC 241 marks the return of Stipe Miocic as he looks to avenge the loss in his last fight against Daniel Cormier. The first fight happened last July at UFC 226. Cormier knocked out Stipe Miocic in the first round.

UFC 241 is star studded. The card also boasts match-ups between Nate Diaz and Anthony Pettis, a welterweight match, and Yoel Romer versus Paulo Costa. Romero and Costa have been scheduled multiple times before but the fight always seems to fall through due to injury. Derek Brunson and Ian Heinisch are set to fight as well. 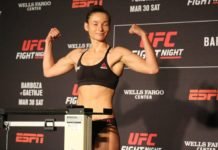