Smilin’ Sam Alvey has been in the fight game a good long while now. The UFC light heavyweight (and former middleweight) made his debut in 2014, and that’s discounting an appearance on The Ultimate Fighter in 2012.

The Team Quest member is as outspoken a fighter as you’ll find, and coming out of UFC 238, that was no exception. Cageside Press caught up with Alvey after the fights, to get his thoughts on the event. Turns out, Alvey is down with the King of Cringe, Henry Cejudo.

“Cringeworthy is the perfect word for it, because it is cringeworthy, and I love it,” Alvey said of the new champ champ. “I can’t wait to see what dumb thing he pulls out of his hat next.”

While some might be laughing at him, “I think I’d be with him,” said Alvey. “He has to know that it’s cringeworthy, that it is. It’s nothing that clever, it’s [that] he’s willing to do it.”

It’s not just the act, however, Alvey pointed out. “Then he goes out and beats everyone. He beats Mighty Mouse, the greatest fighter the UFC’s ever had. He beats anyone and everyone they put in front of him.”

The other title fight at UFC 238, of course, was Valentina Shevchenko vs. Jessica Eye for the women’s flyweight title. Shevchenko ended Eye’s night early with a crushing head kick that laid Eye out flat. “It was a great kick, it was a great setup, it was a great knockout,” Alvey observed. “And about a second after I saw her hit the ground, I was like ‘ooh I didn’t like seeing that.'”

Call him old fashioned, maybe, but “for me, there was a difference, because it’s a girl as opposed to a guy. A guy — like when Overeem got knocked out, I liked the knock out, it was the greatest knockout. Saw this one, and it bothered me that they kept showing it so much.”

Luckily, he noted, “the champ [Shevchenko] did it well, the champ did not dive in for an extra shot, the champ did the best she could to get out of the way.” In fact, he Alvey suggested, “she might be the only champ in the game that would not have gone in for another punch. Not to be mean, but to make sure the fight was finished.”

For more from Sam, and teammate Ricky Furar, watch the full interview (part one above, part two below). 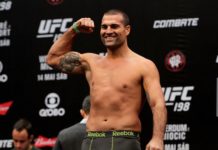 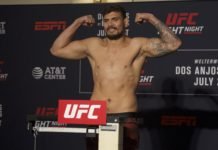