ROC (Ring of Combat) make their UFC Fight Pass debut for ROC 68, live from Atlantic City, New Jersey. The results are below.

In the main event, the vacant featherweight title is on the line as ROC veterans Frank Buenafuente (9-4) and  John de Jesus (10-7) face off. Buenafuente, 31, is 7-2 with the promotion – with both of his losses coming to UFC veteran Julio Arce. Most recently, Buenafuente choked out Michael Lawrence in the first round at ROC 63. Meanwhile, de Jesus was on the last Ring of Combat card, when he challenged for the featherweight belt against prospect Bill Algeo. Unfortunately for de Jesus, he was dominated throughout before getting submitted in the second round. Prior to that, the 28-year-old veteran had a three-fight win streak – all by unanimous decision.

In the co-main event, UFC veteran George Suillivan (17-8) makes a middleweight return when he faces Thomas Powell (3-3). Sullivan has lost his last four at welterweight – three of those coming inside the UFC before getting released last year. Most recently, Sullivan lost a unanimous decision to Manny Walo in November. Fighting out of Belmar, New Jersey, the 38-year-old veteran looks to regroup in front of his home crowd and get his first victory in almost four years. His opponent, Thomas Powell, is a ROC veteran, having fought on their last four consecutive cards. The 24-year old has gone 3-1 in those contests, with all of his victories coming via knockout. Most recently, Powell knocked out Jeremy Puglia in the third round in their bout. A win for Powell would be a statement.

Also on the card, undefeated Joseph Pyfer returns and Mat Caracappa makes his professional debut after a stellar amateur career. 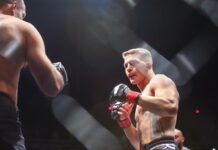