Canada’s Marc-Andre Barriault will have another chance to display his power, as he takes on Krzysztof Jotko at UFC 240 in July.

Marc-Andre Barriault will fight at home once again in his sophomore outing for the UFC. On Friday, promotion officials announced that Barriault, a former two-division champion in Canada’s TKO, would face Krzysztof Jotko at UFC 240 in Edmonton, Alberta. It will be a relatively quick turn around for ‘Power Bar,’ who made his promotional debut earlier this month at UFC Ottawa.

The 11-2 Barriault came up short in Ottawa against Ultimate Fighter winner Andrew Sanchez, losing a unanimous decision in his first test in the octagon. Barriault, however, remains a threat at middleweight, and held both 185 and 205lb gold in TKO. Prior to the Sanchez loss, the Canadian had won eight straight fights.

Poland’s Jotko (20–4), meanwhile, will look to build on a unanimous decision win over Alen Amedovski at UFC St. Petersburg in April. That victory snapped a three-fight losing streak for the middleweight, after losses to David Branch, Uriah Hall, and Brad Tavares. Jotko holds notable UFC wins over Thales Leites and Scott Askham. Overall, he’s 7-4 in the promotion.

UFC 240 takes place July 27 at the Rogers Place in Edmonton, Alberta. Max Holloway defends his featherweight title against Frankie Edgar in the main event. In the co-main event of the evening, Cris Cyborg returns to take on former Invicta FC champ Felicia Spencer. 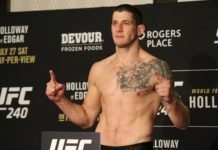 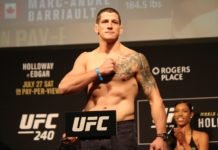 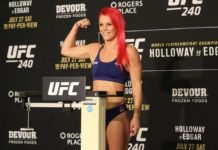 Robertson vs. Santos, Barriault vs. Piechota Are First Bouts Announced for UFC Saskatoon