Featherweight Felicia Spencer will take a big step up at UFC 240 when she faces former champ and divisional terror Cris Cyborg.

UFC 240 could see Felicia Spencer on the card after all. On Wednesday, none other than UFC President Dana White announced on ESPN that Spencer vs. Cris Cyborg was in the works for the PPV event in Edmonton. While she resides and trains in Florida, Spencer is Canadian, and currently undefeated in her career. With women’s featherweight having just a few bodies, she’s the biggest name available for former champ Cyborg.

While the bout is not finalized yet, White certainly made it sound like a done deal. “I’m excited about this Edmonton card. Max Holloway vs. Frankie Edgar is a great main event, and now we have Cris Cyborg vs. Felicia Spencer in the co-main event,” White told ESPN. “Felicia is undefeated at 7-0, a former Invicta world champion, coming off a very impressive first-round finish over a top-three-ranked Megan Anderson. I can’t wait for this fight.”

Spencer made her promotional debut at UFC Rochester earlier this month, defeating Anderson via submission. She was one of the breakout stars of the event, but told Cageside Press post-fight when UFC 240 was suggested that she’d have to confer with her team before committing to the card.

For Cris Cyborg, the fight will be her first fight back after Amanda Nunes knocked her out at UFC 232, claiming the women’s featherweight title in the process. Cyborg (20–2 (1)) had not lost in over ten years prior to that.

While not confirmed, it’s likely Cyborg vs. Spencer will serve as a title eliminator, with the winner in line for Amanda Nunes toward the end of the year.

UFC 240 takes place at the Rogers Arena in Edmonton, Alberta on July 27. Max Holloway defends his featherweight title against Frankie Edgar in the main event. 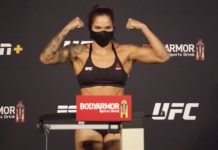 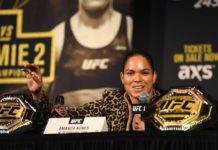 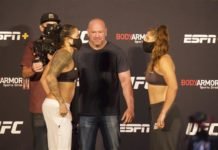 UFC 250: Nunes vs. Spencer Preview — The Task Ahead