With most major promotions taking the weekend off, PFL is the premier organization holding an event this week, so we go there and beyond to find the most notable prospects in MMA in action this week.

Gilpin is very sound when the fight hits the mat, leveraging impressive movement and strong control while also possessing the ability to smoothly take the back. Gilpin has a solid wrestling base and displays crafty trip takedowns and slams to get his opponent down. On the feet, Gilpin has speed, movement, and an accurate rate hand. He fights 2018 tournament winner Lance Palmer (12-1) in a fight where he’s the underdog.

Being 35-years-old in the lightweight division, he’s not really considered a prospect to many, but Andrews’ record and his abilities can’t be ignored. Andrews’ best weapon is his choke as he holds 10 submission wins finding the neck. Nearly all his fights include Andrews threatening the choke at some point. Andrews is susceptible to being taken down but he has good defense off of his back and solid jiu-jitsu threatening submissions from the bottom. On the feet, Andrews has long punches he uses at range and mixing in solid kicks. Andrews even holds a head kick knockout. Overall, a really fun fighter to watch with a perfect finish rate. He fights former UFC fighter Chris Wade (14-5), who I think he will have problems with.

Aliev prefers to stay on the feet where he is quick, explosive, and diverse. Aliev loves to spin, sometimes too much, but it is effective to keep range. Aliev has a good kickboxing base with body kicks and leg kicks, but when he puts it behind his combinations is where he shines. Combinations and output are what Aliev is best at as he throws three to four strikes at a time with good speed and a bit of power. The footwork is also sound moving in and out, once again illustrating his quickness. He fights Carlao Silva (11-1), who lacks footage.

A top-level wrestler, Mamedov finds the takedown naturally, and on top, he is as good as it gets. He sticks like glue, he moves well and is even excellent at taking the back. His ground-and-pound is very solid – not heavy strikes but constant strikes. Once Mamedov gets the separation, he has a good submission game. On the feet, he is explosive, and he lunges forward with hooks and flying knees. He has power but his ground game is where he is best. He fights Ylies Djiroun (16-4), whose takedown defense should fail him.

Movlid is a very solid fighter all around, he is really technical in his stand-up he throws a lot of spinning attacks, not overdoing it, but that is a good thing. Movlid uses the flying knee often with which he knocked an opponent out. With that, he also has good wrestling, he is able to shoot in for a double leg or he can lift and slam you to the mat. Movlid can usually get the fight down multiple times in a fight and from the fights I’ve seen, I see no weakness yet. He fights former UFC fighter and former LFA champ Damon Jackson (16-2-1). This is a fun and tough fight for both.

2018 put Gane on the map when he took the TKO title from a top prospect in Adam Dyczka, who was on the UFC’s radar. Gane has experience in other combat sports such as Muay Thai and kickboxing, going 10-0 in both combined while winning two titles (Muay Thai) in France the process. The Frenchmen is a scary fighter with an assault of power shots to put his opponent away. He isn’t just a power puncher as he is very diverse with an unorthodox striking attack at times. He fights Roggers Souza (8-1), who is coming off a loss but is a big test for Gane.

Maness made a name for himself when he beat top Canadian prospect Jesse Arnett for the TKO strap last September. He is a wrestler first who has good hips and a solid jiu-jitsu base. His striking is coming along nicely, but once he gets it to the mat he’s been dominant. He fights former UFC fighter Taylor Lapilus (14-3), who is the biggest challenge to date for Maness.

Wong is still young in her MMA career at only 3-0 as a professional and is certainly a prospect on the rise. She has experience in Muay Thai, wrestling, kickboxing, and began boxing when she was 13-years-old. Jade is still green, which is expected with only three pro fights, but I like where she’s at. Wong wants to keep the fight standing where she can let her hands go. She is aggressive, rapid, and she has a beautiful dip to the right hand she throws. Jade’s striking has shown to be crisp with combinations. She fights Mandy Bohm (5-0), who lacks footage.

In 2014, Ariane made her pro debut and lost to current UFC fighter Amanda Ribas. Since then, Ariane won her next 11 fights to date. Along the path, she has eight finishes and won a few regional titles. “Sorriso” is a pitbull, stomping forward constantly throwing big looping hooks. She is very good in the clinch with her knees and just her strength controlling the fight. She has some wrestling/grappling but relies on her pressure and power. She fights Ketlen Souza (8-1), which should be a good fight.

Ash hardly has any footage available but he has a solid resume on the Canadian scene. He holds titles in the middleweight and the light heavyweight divisions. Ash also has a win over former UFC fighter Seth Baczynski. He had a loss to former UFC fighter Dominque Steele but last March, he beat Steele in a rematch. He fights Neil Berry (8-8) whose record speaks for itself.

Bush has a background in wrestling who has wrestled all four years in high school, and one year in college. Bush is a good wrestler where the takedowns come naturally. The control on the mat is excellent and is a threat at both the TKO finish and the submission. He fights Jaleel Willis (9-2), who is coming off a loss but is a good prospect as well.

Granger has been in martial arts since a young age capturing a black belt in Tae Kwon-do before transitioning over to MMA years later. Granger is still green, but at 5-0 she has a perfect finish rate and against more experienced fighters. She has four submissions and as she has winded up on her back at times but has solid jiu-jitsu. She still needs work on the feet but she has good leg kicks and decent movement. At only 27, she still has time to develop. She fights Heloisa Azevedo (4-1), who has good jiu-jitsu as well. 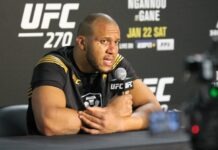 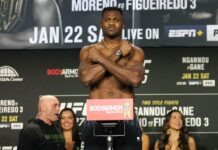