MIZUKI is out of the strawweight tournament at Invicta FC’s Phoenix Rising 1, but the rest of the card is a go!

Invicta FC returns to action Friday night with Phoenix Rising 1, set to crown a new strawweight champion. That would come at the end of a one-night 115lb tournament, a first for Shannon Knapp’s promotion. Among the competitors, former UFC fighters Danielle Taylor and Kailin Curran looked to secure Invicta gold.

At Thursday’s weigh-ins, there was one twist: Japan’s MIZUKI was forced off the card for precautionary reasons due to her weight cut. In her place against Sharon Jacobson will be Amber Brown. Brown was expected to compete in an alternate bout.

Check below for weigh-in results and a gallery of highlights from the Phoenix Rising weigh-in! 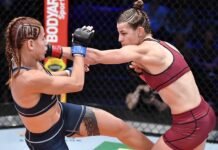