Rory MacDonald and Ilima-Lei Macfarlane both retained their titles at Bellator 220, under very different circumstances.

Bellator’s Welterweight Grand Prix was back underway at Saturday’s Bellator 220, and the end result was… a weird one. In a Grand Prix Quarterfinal bout that doubled as a title defense, Rory MacDonald fought Jon Fitch to a draw. It was the usual Fitch fight, and while MacDonald did rock the grappler with an elbow later in the fight, ultimately, two judges saw it even.

The third, well, he gave it to Jon Fitch. However, as reigning champion, MacDonald retained the title, and moves forward in the grand prix. Though post-fight, ‘The Red King’ sounded unsure of his fighting future, saying that “as a man, I feel like God has really called me the last little while. I don’t know. He’s changed my spirit, changed my heart. It takes a certain spirit to come in here and put a man through pain. I don’t know if I have that same drive to hurt people anymore” (via MMA Junkie).

If MacDonald does go forward as planned, he’ll face Neiman Gracie in just seven weeks in the next round of the tournament.

In other action, Ilima-Lei Macfarlane retained her flyweight title, opening up a nasty gash on Veta Arteaga’s forehead in the third round of their fight. That resulted in a doctor’s stoppage TKO. It also improved the Hawaiian’s record to 10-0. However, Arteaga was giving the champ a fight prior to that, and may have set herself up for a second shot down the line.

Check out highlights from all the action below. 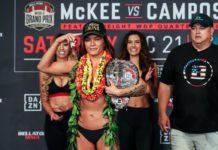 Bellator Hawaii: Who’s Next In Line