Vinicius de Jesus was victorious at CES 55 and wrapped gold around his waist, so what is next for the top New England prospect?

At the end of March, CES MMA held arguably its best card yet, CES 55, as the first sanctioned MMA event in Connecticut. Headlining that card were two of the top welterweight prospects in the area. Vinicius de Jesus and Jeremiah Wells are two names that rightfully have plenty of hype surrounding them. In what would be a five-round unanimous decision win, de Jesus dominated and had CES gold wrapped around his waist.

“It has been a dream come true, this belt means a lot, it gives me plenty of options for what to do next. It is a sign that all the hard work is paying off, but also a feeling that you want to continue to chase, a great feeling.”

Vinicius de Jesus is also a Connecticut native, a winner of three straight, de Jesus doesn’t let the feeling slip by of winning this belt in front of family and friends. He also knows how big of a card CES 56 was and that with the new UFC Fight Pass deal, many new fans were watching him for possibly the first time.

“This card was huge, probably one of the best. I know many are watching at home on Fight Pass. That makes you want to put on the best performance. This is a family business for me, and it feels so good to see my family hold the belt too.”

For those who were watching on Fight Pass or in the arena live, people noticed an interesting situation in between rounds. De Jesus did not sit on his stool once to recover, he did not take water from his coaches, he stood tall and stared at his opponent across the way.

“I was ready for all of this. I was in the zone and wasn’t being denied of this moment. Jeremiah is a great fighter and I needed to be on my game, this camp was crisp and I wasn’t leaving the building without the belt.”

The Brazilian Jiu-Jitsu specialist also spoke on the respect he has for the former champion.

”Wells, he will be back. I had to take this fight. He is one of the best prospects in the game. I had to prove I can beat this guy.”

As for what is next for the new CES champion, de Jesus is glad to have many options and is in no rush to a decision but at the same time is ready to get back in there at any time.

“Man, I have options. I loved fighting for CES and want to defend my title if that is what is next. Also, Bellator is coming to New York soon and that card would be fun. I also have some others speaking with my team so there are options and that feels good.”

Although he’s okay with waiting it out for the right opportunity, de Jesus admitted that in reality, he’d be back in the cage sooner rather than later due to his own activity level. He is a fighter who loves to fight.

”Things will get announced soon probably. You know me, I like to get right back in the fights, whether it’s for CES, Bellator, or someone different, it won’t take long to agree.”

Vinicius has fought with Bellator four times and it would not be surprising to see him partake in the New York card, seeing as a man he called out will also be on that card, Dillon Danis. The “Brazilian Bad Boy” loves fighting at home in Connecticut, so CES could be next for him, or he could be waiting on Bellator’s inevitable return to the state, either way, de Jesus has options and he likes it this way. 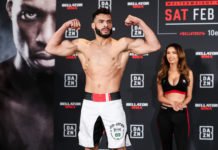 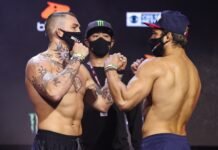 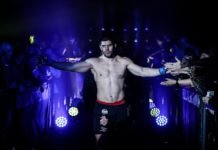