After a scary couple of days, it appears things are looking up for Angela Magana, who awoke from a coma Thursday morning following surgery in San Juan, Puerto Rico.

After two days in a coma following complications from surgery, Angela Magana is on the road to recovery. According to a new report by MMA Junkie, Magana has been in and out of consciousness, and was able to talk beginning Thursday morning. While it does not appear she’ll be 100% for a while, that is certainly good news following a scary setback for the fighter.

Magana’s coach Gabriel Lamastus told the site that “Angela is responding to the treatment and is waking up!!!” and later added that she had been speaking.

Magana had been expected to compete at Combate Americas: Reinas this month. However, after hurting her back during training, she elected to undertake a nerve block for a herniated disk. The injury saw further complications arise (Cauda Equina syndrome, or CES), however, requiring surgery. A reaction to anesthesia led to Magana slipping into a coma. In an eerie coincidence, Magana had expressed concerns about a reaction to anesthesia prior to surgery.

Magana’s team had been posting updates to her official Twitter account regarding her status. The most recent, in which Lamastus appeared in a video saying they were confident she would recover, appears to have been on the money. 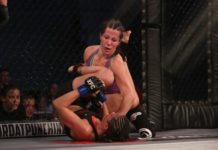 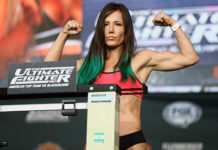