According to former UFC fighter Angela Magana’s team, the fighter is currently in a coma following complications from spinal surgery.

Angela Magana went into surgery Tuesday morning due to an injury suffered in training for her fight at Combate Americas: Reinas. According to Magana’s team, she suffered a herniated disk, and then opted for a nerve block to continue training. However, the nerve block resulted in ‘Cauda Equina’ Syndrome. Magana was then rushed into emergency surgery, and hasn’t woken up since.

The news was first revealed by her team earlier in the day through her Facebook page, where a statement advised that “there have complications and they cannot wake her up. They are trying many options we will keep you up to date. Thank you for the outpouring of concern and love.”  Only hours prior to this, Magana was posting on Twitter about the surgery.

Magana posted many videos and tweets prior to the emergency surgery, tagging herself at University hospital in San Juan, Puerto Rico where she currently resides. Since going into a coma, her team has continued to post videos of Magana prior to surgery, and provided updates.

Magana’s career in MMA has been a controversial one. Donning the name ‘Your Majesty,’ she was apart of the Ultimate Fighter: A Champion Will Be Crowned. She lost in the first round in the TUF house, but despite this would go on to have three fights in the UFC. Going 0-3, after her loss to Amanda Cooper in December 2017, she was released from the promotion. Her most recent bout was a loss to Kanako Murata at RIZIN 12 in August of 2018.

Angela was expected to return under the Combate banner against Kyra Batara later this month. Cageside Press spoke to Magana prior to the fight (embedded below).

MMA Junkie spoke to Magana’s coach, Gabriel Lamastus, regarding the situation. Lamastus was at the hospital with Magana. “The surgery went fine. The problem was anesthesia,” he stated. “It’s very rare that patients react bad to anesthesia, but it does happen, and I guess this is one of those rare cases. But I’m being positive. She’ll be fine, and she’ll wake up. She’s a fighter. I’m just staying positive.” Magana actually expressed some concern about being put under prior to the surgery. That’s because, Lamastus explained, her aunt had died from anesthesia. 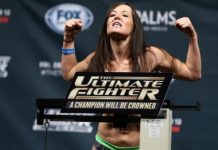