Muay Thai will take center stage at ONE Championship: For Honor in Indonesia next month.

The main event for ONE Championship: For Honor in Jakarta, Indonesia on May 3 is official. In a press release Tuesday, the Asian MMA promotion, coming off a big weekend in Tokyo, announced that Muay Thai action would top the For Honor card. In the first defense of his Flyweight Muay Thai title, Sam-A Gaiyanghadao will defend the belt against English striker Jonathan Haggerty.

Gaiyanghadao claimed the title last May against Sergio Wielzen, finishing the title fight with a fourth round knockout. The For Honor main event against Haggerty is his return to action under the ONE banner.

Only 22 years old, Haggerty made his debut in ONE Championship against Joseph “The Hurricane” Lasiri. That fight, at the Eternal Glory card also in Jakarta, went the distance, with Haggerty getting the nod on the judge’s scorecards.

No other fights have been announced for ONE Championship’s For Honor card as of yet. However, more bouts are expected to be announced in the coming days. The event takes place at the Istora Senayan in Jakarta, Indonesia on Friday, May 3, 2019. It marks the promotion’s second stop in Indonesia so far this year. 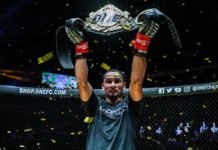