Julius Anglickas, the current LFA light heavyweight champion, will look to punch his ticket to the UFC on the Contender Series this summer against Karl Reed.

The big hit the Contender Series is back for season 3 this summer. Contracts have been sent out to fighters and fights are already being booked. Sources have now confirmed to Cageside Press that a light heavyweight bout between Karl Reed and Julius Anglickas will go down July 2.

Anglickas is 6-1 as a professional, currently on a five-fight win streak after a loss to Cameron Olson in mid-2016. Born in Lithuania, Anglickas now lives in St. Charles, Missouri. The former Oregon State football player is only 27-years-old.

Anglickas, in his most recent bout, beat Clayton York for the LFA vacant championship. In 11 career fights (pro and amateur) he has a 100-percent finish rate. Wrestling, cardio, and grappling are his strengths.

Karl Reed, like Anglickas, is 6-1 as a professional with his loss also coming to Cameron Olson. Reed, residing out of Gaffney, South Carolina, trains out of Upstate Karate with Stephen Thompson and his father.

The sole loss to Olson came on the first season of the Contender Series by unanimous decision. Since then, Reed has won his next four fights. The 30-year-old would be described as a karate/wrestler duo.

Julius Anglickas was featured by Cageside Press as one of the prospects the UFC should have on the Contender Series this summer. Karl Reed was included in Cageside Press’ 10 light heavyweights the UFC should sign in 2019 list at the beginning of this year. If this fight results in a contract for Reed, he would be the fifth fighter on that list to sign with the UFC, joining Klidson Farias, Dalcha Lungiambula, Ivan Shtyrkov, and Nicolae Negumereanu. 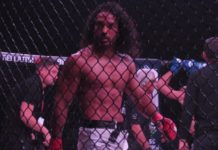 Bellator 266: On The Last Fight Of Contract, Alex Polizzi Is Looking To Put...