Get to Know Liana Jojua:

Jojua was born in Tbilisi, Georgia. She trains at Akhmat Fight Club out of Grozny, Russia, with some of the best Russian fighters. Jojua was a fight fan from a young age and watching fights of Gina Carano as a 16-year-old made her fall in love with the sport. With a foundation in Muay Thai, she made her pro-MMA debut in September of 2015 while only going 1-0 as an amateur. After a two-fight skid in 2016, Jojua hit her stride and is now on a five-fight win streak. Her last fight came in February of last year for Fight Nights Global. She beat Marina Mokhnatkina for the FNG title, who I believed would become the first women’s champ in Russia.

How Does Liana Jojua Fare in the UFC:

Jojua is a legit talent at her age (23) who I think beats a few currently ranked fighters. I’m confident she would beat Talita Bernardo, Lina Lansberg, Bethe Correira, and Irene Aldana and maybe some more. On the feet is where she will show her weaknesses as her footwork is flat and she is easily hit. On the mat, either on top or off her back, is where she wants to be. Her wrestling could use some work but once she gets the clinch she does a great job throwing in knees and using trips. Her jiu-jitsu is fantastic and her submission game is strong with five submission wins. You will see Jojua lose position at times and drop to her back. She has a great guard and good hips as she is always moving, looking to better her position. I think she’s a future ranked fighter, but if she had the wrestling of Tatiana Suarez, she would be so much more of a threat but her striking will hold her back. Overall, she’s a great signing and she will show the fans some excellent jiu-jitsu.

A debut date or opponent has yet to be announced. 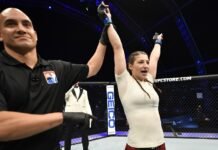