Kevin Aguilar improved his win streak to nine at UFC Philadelphia, with his last two in the UFC. He was a little more worried about bloodying up Jon Anik, however.

Philadelphia, PA — UFC featherweight Kevin Aguilar was in great spirits back stage at UFC Philadelphia on Saturday night. Having picked up a hard-fought win over Enrique Barzola, Aguilar had his second straight win in two UFC fights, and ninth straight overall. Improving to 16-1 as a pro, don’t sleep on the ‘Angel of Death.’ Who, following the win, was a little worried about the blood. The blood on Jon Anik’s suit, that is.

“I just kind of sprayed blood at him,” he revealed post-fight. “My nose was starting to bleed, and then I started talking to the announcer [Anik] after the fight.” And got blood right on “his nice cashmere suit. Like ‘no!’ I didn’t say nothing though.” Aguilar, however, did notice. Anik didn’t.

“Maybe if I don’t say anything to him, maybe he’ll think it’s somebody else’s.” Well, probably not now that he’s gone on camera saying it.

Jon Anik’s suit aside (which will be a great story for Aguilar moving forward), he has to be happy with the win over Barzola at UFC Philadelphia. “He was trying to find his way in, but I was staying tight. Good accurate hands. He was jumping, throwing a bunch of fancy techniques here and there. But nothing I wasn’t ready for.”

Now with his second win in the promotion and a great streak going, Aguilar should be over the nerves. Not that he ever really felt them, even in his debut. “Honestly, since fight number one to fight now, I’ve had the same feeling. Same feeling always stays with me, never goes away,” he explained. “And that’s how I like it. Gets me ready, keeps me on point. Now I have to go out there and put on a show, no matter for who it is. I have to come ready, every time.”

Who comes next? Given the opportunity, Aguilar declined to make a call out. “Nobody in particular” stands out, he said. “To me they’re all numbers. Give me number fifteen, and I’ll work my way down to number one.”

“No offense to any of the top fifteen,” the featherweight added. He does have plans to celebrate, however. “That’s the three things I want to do: eat a cheese steak, go run the steps, and then go take a selfie with the Rocky statue. Maybe shout ‘Adrian, we did it!'”

Now that’s how you celebrate in Philly.

Watch the full post-fight press scrum with Kevin Aguilar at UFC Philadelphia above. 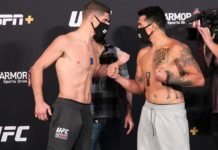