Sodiq Yusuff has a lot to fight for at UFC Philadelphia, where he takes on Sheymon Moraes on the main card this Saturday night on ESPN.

Wilmington, DE — Perhaps the most interesting story heading into UFC Philadelphia (UFC on ESPN 2) this weekend is that of Sodiq Yusuff. A child of Nigerian parents, he immigrated to America with his mother and younger brother, leaving a host of other brothers and sisters behind in his native Nigeria. As Yusuff told reporters including Cageside Press on Thursday, his mother was simply playing the numbers game.

It worked. Yusuff moved to America, and now finds himself entering his second UFC fight after appearing on the Contender Series, and debuting at UFC Adelaide in December. He’s gone further already than most kids under similar circumstances. So it’s a feel-good story, but one still unfinished. Far from it.

Yusuff (8-1) turned pro in 2016, and has improved his game step by step, from the cage to weight cutting. He trains with a number of boxers, guys who have been doing it their whole lives. That topic got an interested reaction from the media ahead of UFC Philadelphia, because really, when doesn’t the boxing vs. MMA debate get a reaction?

For Yusuff, he tries to stay humble when breaking the barrier between disciplines. “Because most of them have been doing it since they were kids. And because of the accolades they’ve gathered throughout the years,” he explained. “There’s no real amateur system for MMA. They’ve gone through golden gloves, some of these are Olympic alternates or Olympic trials, people who actually compete in the Olympics.”

And so Yusuff gives his training partners in the sweet science their due respect, even if “of course I understand in a real fight how it would play out.” But he’s there to learn, not teach, in the end.

The boxing crowd is a little different from the MMA world as well. “Especially around where I’m from, there’s a lot of knuckleheads in boxing,” Yusuff let slip. “But there’s a lot of good guys in there too. MMA has a little bit more traditional martial arts involved in it, so you’re going to see a little more honorable, respect type stuff. Where boxing is just, a dog eat dog world.”

Boxing aside, there’s a lot more to Yusuff’s story. A lot. Much of it still centers on his family. His UFC run. And the rise to prominence of African fighters in MMA. On the family front, Yusuff has been open about it all week, for good reason. “I wanted to get the word out there more, because I’ve been trying to get my brothers and sisters over here. And it’s been a little bit hard for me to get a visa for them.”

Yusuff is hoping someone might reach out who has more info than he does. “Even if it’s just a visitation visa for now. Some of them have never left their villages. Some of them, Lagos is the biggest city that they’ve known,” he explained about the life lived by his siblings back in Nigeria. “So it would be nice for them to see a little bit of America. I send money back as much as I can, but nothing would be [as great as] if they were actually able to come over here and work by themselves.”

Sodiq believes that it’s been harder of late for Nigerians to get visitation visas. “Especially because [the government] think they’re just going to come here and stay and not be able to come back.” But all he really wants is to help change the lives of his brothers and sisters, drastically. The way his own life was changed.

“My mom always says her biggest regret was not taking all her kids to the Embassy when she went to get the visa for me and my little brother,” he continued. “But she was playing a numbers game. You got to maximize your opportunity. So she only brought me and my little brother.” The reasoning was simple. “She just picked the two youngest.”

When the trio arrived in America, it was years before they could even go back and visit, as they were still in the process of becoming permanent residents of the U.S. “Now we go back almost every year, we try to go back every couple months, just to see them, just to keep in touch. Like I said I send money, but that’s not a permanent solution.”

Oddly enough, the current political climate in America, as complex as it is, hasn’t had the effect you might expect. “You know what’s funny, that kind of something I thought about, but it helped us out a little bit growing up, because people around here were always looking for Mexicans.” It’s not just an off-color remark, either. As he pointed out, native-born Africans blend in and wind up being mistaken for African Americans.

There’s probably a lesson to be learned in that. And Yusuff understands that the political climate overall, “it’s a complicated situation. I understand, people are like ‘you can’t leave your door open for everybody.’ But mostly everybody I know, especially Africans, you’re not coming over here to ruffle any feathers. You’re definitely coming over here to change your life.”

Changing his life is certainly the plan for Sodiq Yusuff in the UFC. The path has been blazed by fighters like Kamaru Usman, newly crowned UFC welterweight champion. “I’ve never been more emotional from watching a fight than when Kamaru actually won,” Sodiq Yusuff admitted. “I’ve never been closer to crying from watching a fight. I couldn’t believe it.”

Don’t miss the rest of this week’s UFC Philadelphia media day scrum with Sodiq Yusuff above! 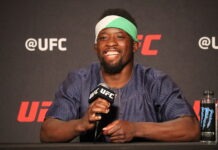