Bantamweight Cody Stamann was highly critical of his performance at UFC 235, despite earning a unanimous decision win opposite Alejandro Perez.

Las Vegas, NV — Fighters are often their own worst critics. Such was the case backstage at UFC 235 at the T-Mobile Arena in Las Vegas, with Cody Stamann. Stamann picked up a unanimous decision win over Alejandro Perez on the televised preliminary card Saturday night. He was not, however, happy with his effort.

Speaking to reporters including Cageside Press, Stamann suggested that coming in off a loss, even one he doesn’t agree with, might have been the culprit. “I’ve really never lost as a professional,” he said. “I had won split decision loss coming into that, but it was like a really, really bad split decision. If any of you guys had watched it, you guys would think I’d won. So that was basically my first professional loss.”

Stamann would later describe his lackluster showing as firing on six of eight cylinders. “I don’t know what I was doing. I was like staring at myself in the mirror in there. I didn’t pull the trigger, and that’s just not what I’ve been training to do,” he explained. “I’ve been training to be a killer. I honestly leading up to this fight thought I was going to run through Alejandro Perez.”

While it didn’t turn out that way, Stamann had to give credit to Perez. Coming in, they’d had a bizarre incident back stage, with Perez “mean mugging” Stamann even when the cameras were off after weigh-ins. But, he said, “the kid does hit hard. It’s hard to explain the way he fights, he doesn’t really let you get away with anything, he’s a really really tough kid.”

That said, “I’m better than what I showed tonight. I want to get back in there as soon as possible and prove that.”

As to when that might be, or where, Stamman suggested that “Vegas has been good to me, I’m 4-1 in Vegas. What’s the next Vegas card, is that like two weeks? I’ll fight then.” Ajamain Sterling would be a fighter he’d like another crack at. though that may not be in the cards just yet. 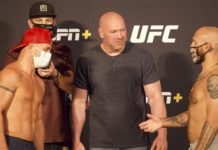 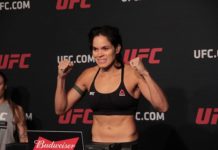