MMA is certainly a global sport, and this weekend’s prospects certainly signify that, fighting in Canada, the United Kingdom, and Japan

Pat Pytlik is a solid prospect out of Canada with a 100% finish rate who trains out of Hayabusa Training Centre, which is a camp filled with top-notch talent. Pytlik started his combat sports venture in Muay Thai as he holds a 27-7-2 record. There isn’t much footage available, but what you can tell is that he is dangerous in the clinch with key elbows stopping three of his bouts with elbows. He is also very technical with solid output but still, a lot is unknown about the 29-year-old. He fights former UFC fighter Jake Lindsey (13-8), which is a big fight for Pat.

South Korea doesn’t have many heavyweights, let alone many I’d consider a good prospect, but Jung is an exception. Jung is mainly a striker and is very well-versed on the feet. He’s a technical striker who has an excellent counter ability. Jung doesn’t quite have KO power, but his timing and accuracy are solid. Jung also has good ground-and-pound, cardio and defense. Jung is very unknown but I really like him as a heavyweight prospect. He fights Sasa Milinkovic (6-1) who is dangerous and powerful, so this is a good test for Jung.

Jai Herbert, I would say, is still unknown to the majority of the fanbase but I predict that will change as he has the potential to become a Cage Warriors champion. Herbert has decent wrestling and good jiu-jitsu to fall back on but he is much more talented on the feet. He does a great job fighting long with an excellent toolset of kicks, punches, knees, and elbows. Herbert is dangerous in all aspects on the feet but his right hand is his money shot. He fights Steve O’Keefe (9-3), whose last two losses have come to Conor McGregor and Chris Fishgold, so this is a big fight for Jai.

*There are many fighters fighting this week I’ve heard good things about but there is not much in the way of footage. 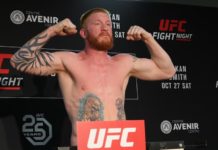