No, there was no “butt pat” at the face-off between Robbie Lawler and Ben Askren this week, though Lawler would still have preferred it if ‘Funky’ had not made contact.

Las Vegas, NV — There’s been nary an unkind word traded between Ben Askren and Robbie Lawler heading into UFC 235. The usually razor-tongued Askren hasn’t had anything bad to say about his debut opponent in the UFC, probably because Lawler simply isn’t the type to get drawn into the trash talk. After all, these men are paid cage fighters. While finally recognized as true athletes these days, the reality is, fists hurt a lot more than words.

That said, Askren finally turned some heads when he gave Lawler an apparent butt pat during their face-off. With so little said between them, the media latched on to the story. Lawler cleared up the exchange on Thursday, at the UFC 235 open workouts.

First up, however, on the subject of the fight, “I’m fine tuned and ready to go,” he told reporters including Cageside Press.

Asked if he viewed Ben Askren as a well-rounded fighter, Lawler (28–12 (1)) answered that “I see a guy who’s going to mix stuff up and then look to wrestle. Obviously he works on every aspect, striking a little bit.” Still, as ‘Ruthless’ sees it, “he’s not a high-level wrestler. What he does expect, however, is that “he’s going to mix it in where it fits with his wrestling, and try to keep me off balance, set up his stuff. I’ve got to make sure I’m not getting caught with anything stupid, and just stay sharp.”

As to his game plan, “it’s always the same game plan for me,” Lawler said. “Go out there and kick the guy’s ass. Defend takedowns, where ever the fight goes, be ready. Sh*t happens in a fight, so you have to be ready.”

Lawler has no idea what Askren said to him at the pair’s face-off, which featured a much ballyhooed “butt pat.” “It doesn’t bother me. I wish he didn’t do that. He touched me, but he didn’t touch me on my butt. Not a big deal. I’m focused on dealing with these interviews,” the former champ said with a laugh.

But no, it didn’t bother him. “Did I look annoyed? It’s part of the sport. No, it’s just like, whatever. We get to fight on Saturday. All this stuff that happened before doesn’t mean sh*t, because Saturday we get to fight. All the talking is done, all the hoopla’s done. So that’s really all I concentrate on.”

Robbie Lawler takes on Ben Askren as part of the main card at UFC 235 this Saturday, March 2 at the T-Mobile Arena in Las Vegas, NV. 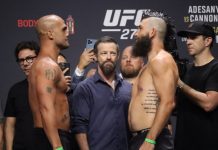