ROAD FC 52 saw the crowning of the million dollar lightweight tournament winner, as Mansour Barnaoui won it all — and claimed a shot at the lightweight champion.

South Korea’s ROAD FC was in action over the weekend, with the finale of their million dollar lightweight tournament topping the ROAD FC 52 card. The co-main event, meanwhile, saw the promotion’s bantamweight title awarded.

It was Mansour Barnaoui who took home the big money, however. Against Shamil Zavurov, Barnaoui appeared to have his hands full, as the two went at it early. Through two rounds, Zavurov was able to take his opponent down, though Barnaoui frequently reversed.

However, come the third, Barnaoui launched a jumping knee, and put Zavurov out! That punched Barnaoui’s ticket to a fight against ROAD FC Lightweight Champion Kwon A-Sol. The bout will take place on May 18, but for now, Barnaoui can celebrate winning the million dollar tournament.

The co-main event had Kim Min-Woo in a third fight against rival Moon Jea-Hoon. Kim did not disappoint, submitting Moon via a first round triangle to claim bantamweight gold.

The ROAD FC 52 card opened with a preliminary event known as Young Guns 41. That card within a card saw a number of talented prospects go at it, with Yang Hae-Jun defeating Lim Dong-Hwan in the featured fight, via an Americana.

For full results be sure to check out our ROAD FC 52 results page. Check below for a gallery of highlights courtesy of ROAD FC.

Scouting the Globe: The Five Best Prospects From France 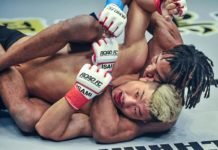