Call to Greatness saw two key bouts in the promotion’s lightweight grand prix play out, and the first of two semifinal match-ups are now set.

ONE Championship was in its home base of Singapore over the weekend. There, it hosted Call to Greatness, an event that saw lightweight grand prix action, and a women’s atomweight Muay Thai main event. That main event, with the inaugural title in the weight class on the line, was a closely contested one, but in the end, Stamp Fairtex did enough to get the nod over American Janet Todd.

In grand prix action, lightweights Saygid Guseyn Arslanaliev and Ariel Sexton picked up big wins. Arslanaliev made short work of ONE standout Ev Ting, taking just twenty-five seconds to score the knockout finish. Sexton, meanwhile, was in a firefight with Singapore’s own Amir Khan. Khan most certainly had some success early, but as time wore on, the local hero began to tire. That opened up an opportunity for Sexton to take control of the fight, and take it to the ground, where he had the clear advantage. He did just that, sinking in the rear-naked choke in round three and forcing the tap.

Arslanaliev and Sexton will now face off in semi-final action, with the other side of the bracket, including former UFC and Bellator lightweight champ Eddie Alvarez, getting underway next month.

The event also had a baby shark outfit. Need we say more?

Check below for a gallery of photo highlights from ONE Championship: Call to Greatness! 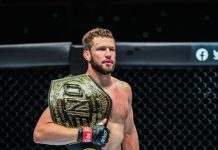