After a successful Bellator debut, Austin Vanderford explains the calming, motivating presence of wife Paige VanZant being in his corner.

Uncasville, CT — Bellator 215 did not turn out the way many fans had hoped, especially not with a main event that ended tragically early. That, however, was no fault of the man who kicked off the main card, newcomer Austin Vanderford. Vanderford did his job, coming through with an impressive submission win. And yes, that was Paige VanZant in his corner. The two were married less than a year ago.

The UFC star will no doubt be a constant presence at Vanderford’s fights, and it’s one he couldn’t be happier with. You might call his win a belated Valentine’s Day gift. At the very least, his first round submission of Cody Jones was one of the high points for the card.

“You get out with a first round finish debut, you’ve got to be happy with that,” Vanderford said following the fight. And he admitted he might have had something to prove.

No doubt because of his experience on Dana White’s Tuesday Night Contender Series. Vanderford won his fight there earlier this year, earned a submission — but not a UFC contract.

Asked by Cageside Press if the timing of his arrival to Bellator was fortuitous, with the spotlight on their welterweight division thanks to the grand prix, Vanderford agreed. “I think it’s the opportune time, for sure.”

“The welterweight division’s so stacked in Bellator, it’s awesome. I’m coming in at the right time,” he continued. Well, just about the right time. “Unfortunately, ideally maybe come in a year and a half ago or whatever, so I could be in the tournament. But I’m ready to mix it up with the guys who are getting out and all that stuff, and prove myself there.”

With him in his fight is wife and UFC superstar Paige VanZant, who was in his corner on Friday. Her presence, “it’s calming and it’s motivating, both,” Vanderford said. “Honestly she brings a lot to the table for me, because she’s the one with me at every single practice. When we got home at night.”

“Other than [coach] Fabiano who is with me during all the practices, she knows me the best out of anyone,” the welterweight explained. “She knows what I’m capable of, the skills that I have, and what I can do and need to do.”

“Honestly coming into the fight week, we’d only planned on two corners. I had no idea we even got three, once I found out we got the third, I was like ‘you’re in, a hundred percent.’ It’s a great thing,” he said, adding “I loved having her in the back. It’s a special dynamic, and it’s something I feel I can really take advantage of.” 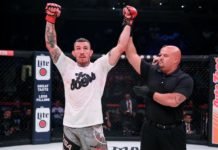 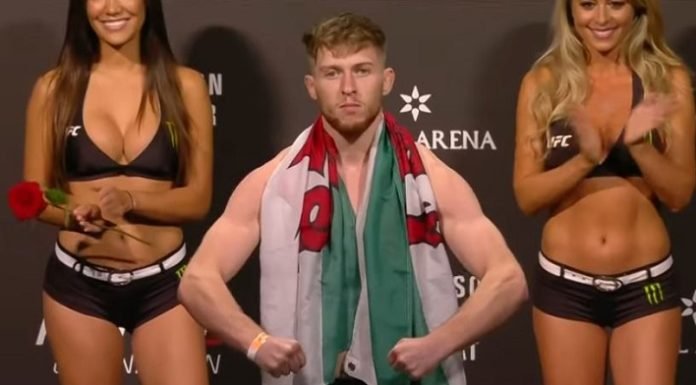