Bellator 215’s main event ended in misery for Sergei Kharitonov; following the unfortunate ending, Matt Mitrione issued an apology for what was clearly an unintentional but still brutal low blow.

Uncasville, CT — The main event of Bellator 215 was expected to end early. Just not that early. What many saw as a knockout guarantee ended just fifteen seconds in. Yes, 1-5. That, after Matt Mitrone connected with a low blow kick that sent Sergei Kharitonov to the ground in sheer pain. Kharitonov’s reaction might have been comical had it not been so painful to watch. Thoughts of Devin Powell (who once ruptured a testicle training with Joe Lauzon) immediately came to mind.

It looked that bad. Fans in attendance at the Mohegan Sun Arena in Connecticut voiced their displeasure. They came to see a fight, and after a mixed bag of action on the main card, they felt short-changed. Kharitonov was taken out of the cage on a stretcher, but not from any knockout. You could almost sympathize with the masses, at least until you went back to the image of Kharitonov, face a mask of pain.

Matt Mitrione addressed the disappointment afterward, saying that “I cannot begin to explain how sorry I am for everybody that paid money to come to the fight, to watch that fight between Sergei and I. It would have been really dope, it would have been a great fight. Obviously it was unintentional. It’s just the worst possible situation.”

Mitrione said he had volunteered to fight at Bellator 216 if anyone fell off the card due to injury or illness. “Obviously I wouldn’t wish that on anybody, but if that’s the case, I’m down to fight.”

“Sergei, I’m genuinely sorry,” he added, saying he was as apologetic as could be. He later touched on the idea of fighting again soon, saying “I know that there’s a card in Chicago, and I live in the mid-west, and I’ll bring a gang of people there that will act straight foolish in there if we fight in Chicago.”

Getting back to the subject of the low blow, Mitrione told Cageside Press that “I didn’t realize how bad it was” when it first connected. “It was a well-placed kick. For anyone that’s never been kicked on the high inside thigh, it’s tender, it’s really tender, and it’s nearly impossible to check if you can land it in the proper spot. I think everybody knows from my fighting career, I throw low kicks pretty well, I let them fly.”

“So if I kicked him in the nuts,” the heavyweight continued, “especially, his reaction, his reaction looked— it made me feel, oof, it wasn’t good man.” 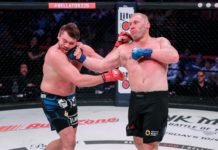 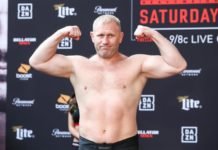 Bellator 225 Results: No Low Blows, But A Weird One Before Sergei Kharitonov Finishes Matt Mitrione 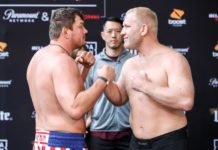