MMA is off to a great start in 2019 with UFC Brooklyn and now UFC Fortaleza, so now we’ll look towards the future at 10 bantamweight prospects that should be in the Octagon by year’s end.

First up, last year’s list, with both Nathaniel Wood and Ricky Simon making it to the big show. Now on to 10 bantamweights we should see in the UFC by year’s end!

Mix was on the list last year and it seemed like he was a shoo-in. Now 9-0 with two more KOTC title defenses, and also signing with manager Ali Abdelaziz, this should be the year. Mix is all about pressure and he is always moving forward walking his opponent down.

Mix has twelve career submissions (counting his amateur days), showing he is more than comfortable on the mat. As he’s now training out of Jackson-Wink MMA, he’s been improving every step of the way. At 20-0 including his amateur bouts, Mix is more than ready for the big leagues.

Scouting the Globe: The Five Best Prospects From Russia 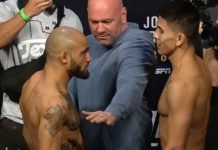