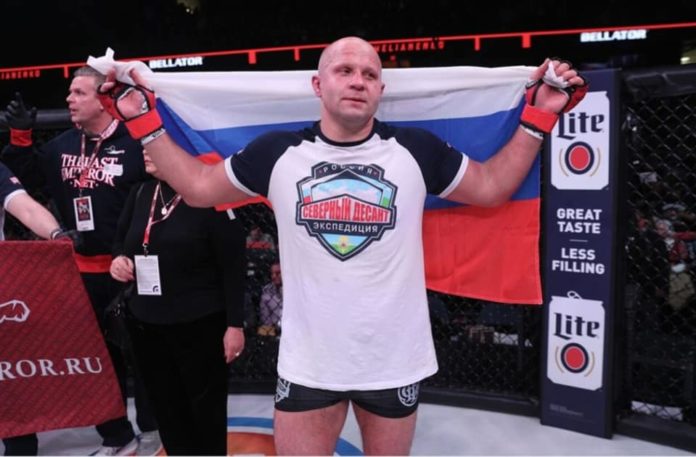 Following Fedor Emelianenko’s fifth knockout loss of his career, and with recent talks of retirement, we revisit the question: What is Fedor’s legacy?

For years, Fedor Emelianenko was the UFC’s golden snitch. The big fighter they could never quite catch. Despite fighting in other large promotions such as PRIDE, Strikeforce, and later Bellator, the UFC could never quite get the ‘Last Emperor’ under contract. Throughout years there was always talk, and even discussion of a fight against Brock Lesnar in 2010 at Cowboy’s Stadium in Dallas. However, all the talk never lead to him joining the largest Mixed Martial Arts organization in the world.

Due to the Russian great never signing with the UFC, there was always criticism. Especially in recent years. Those critical of Fedor never joining the UFC began calling him a can-crusher, with some going as far to call some of his fights fixed. Chael Sonnen didn’t exactly help matters. However, just a single glance at Fedor’s storied career and resume can put all of that criticism to bed.

In Fedor Emelianenko’s prime, the best heavyweights in the world were in PRIDE. While the UFC’s heavyweight division featured Andrei Arlovski and Tim Sylvia treating the championship like a hot potato, the likes of Mirko Cro Cop, Antonio Nogueira, Kevin Randleman, Mark Coleman, Mark Hunt, and Wanderlei Silva (okay, he wasn’t a true heavyweight) were all squaring off in the ring. While one might argue the UFC was the better overall organization at the time, looking at the talent at heavyweight, it isn’t even a comparison.

It’s also worth noting that from the years of 2001 to 2010, Fedor Emelianenko was barely even challenged, nevermind losing rounds. The lone moment where it looked like Fedor would fall came when he was rocked by Kazuyuki Fujita in 2003 at PRIDE 26. Despite being stunned, however, Emelianenko would come back and rock Fujita himself, prior to submitting him in the first round.

If the argument is that Fedor didn’t face quality opposition in his career because he didn’t fight in the UFC, it’s downright flawed. That couldn’t be further from the truth. Fedor Emelianenko in his almost 20-year long career defeated six UFC champions. Including the previously mentioned Arlovski and Sylvia, who would be his main opposition had he been in the UFC in his prime years. He also defeated former champions Kevin Randleman, Mark Coleman, and most recently, Frank Mir.

That’s not even mentioning Emelianenko’s victories over former title challengers who are legends of the sport in their own right. Fedor also defeated the likes of Mark Hunt and Mirko Cro Cop in PRIDE. He most recently dominated former two-division title challenger Chael Sonnen at Bellator 208, at the ripe old age of 42.

Yet with a loss comes the naysayers. Fedor Emelianenko lost at Bellator 214 to Ryan Bader via knockout, yes. He came up short in what was likely his last chance at a major title. Lost the heavyweight grand prix. That isn’t what he should be remembered for. In the prime of his career, he wasn’t even touched by the bulk of the opposition that he faced. At the end of one’s career, you either go out on your back or you go out on top. The latter is very rarely the common theme.

Fedor Emelianenko’s career may have officially ended after his loss this past weekend, but that doesn’t mean we’ll remember him on his back after the Bader knockout. What we’ll remember is the incredible performances against Cro Cop, dominating Nogueira twice, and even knocking out Mir in a come from behind performance at the age of 41.

While some may debate whether Fedor is the greatest of all time, that much can never truly be known. What we do know is that in his time, the Last Emporer lived up to his name. The man couldn’t be tested as a fighter, and while the last icon of PRIDE may have fallen, it doesn’t mean that he wasn’t incredible for many, many years.