The UFC is adding to their roster often, and this series will give you a rundown on what to expect from newcomers such as Marcos Mariano.

The Octagon is coming to Melbourne, Australia, on February 9 for UFC 234. At times you see the promotion sign someone out of left field, but Marcos Mariano caught everyone off guard. He will take on Lando Vannata on the featured Fight Pass Prelim.

How Does Marcos Mariano Fare in the Octagon?

Often you will see UFC sign someone that you didn’t expect to get the call-up. With that said, no one thought a 32-year-old fighter with a 6-4 record would have a chance of making it to the big show. It’s even more puzzling cause Mariano hasn’t shown any improvement over the years and remains a low-tier fighter. He’s 6’2″ with a long range but doesn’t utilize it as he thrives more in the clinch. His takedown defense is also subpar since he’s easy to cut off and takedown. Overall, without being too harsh, I don’t see him matching up well with anyone.

How He Matches Up with Lando Vannata:

Despite Lando’s less than stellar Octagon record (1-3-2), he’s very creative, dynamic, athletic, and has fought good competition. This is a favorable matchup for Vannata as he starts his new four-fight contract with the promotion. Vannata does have holes in his defense and cardio, but Marcos isn’t the guy to exploit that. I see Vannata winning easily. 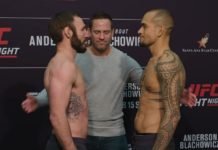