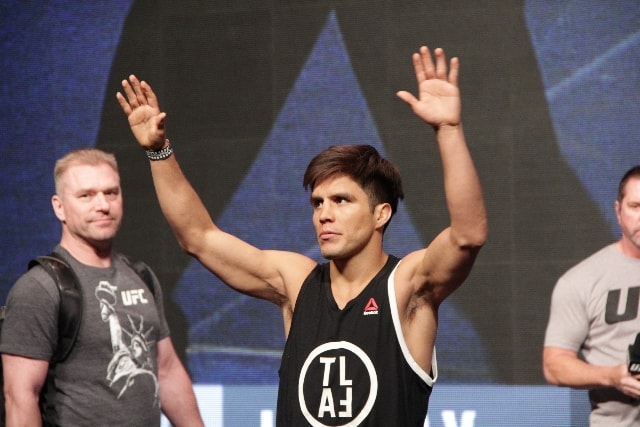 It’s a new year, which means it’s the start of a new Cageside Press Staff Picks competition. Kicking things off for 2019 is UFC Brooklyn.

A new year is upon us and Heath Harshman is looking to defend his two-time Cageside Press Staff Picks title. He’ll be going up against more competition in 2019, as MMA Today has merged with Cageside Press ahead of UFC Brooklyn.

The main event of UFC Brooklyn is a superfight between champions TJ Dillashaw and Henry Cejudo (who is an Olympic gold medalist if you haven’t heard). This will be Cejudo’s defense of his flyweight title since winning the belt over one of the greatest fighters of all time in Demetrious Johnson. Dillashaw is on his second bantamweight title reign, and has a total of three title defenses to his name. The 23-person staff is nearly split, with Dillashaw getting just one more pick than Cejudo.

The co-main event features disgraced former NFL star Greg Hardy against Contender Series alum Allen Crowder. Hardy has turned to MMA after domestic violence led to the demise of his football career, and the UFC has given him a path to make a career out of this sport. His opponent, Crowder, is 0-1 in the Octagon after starting his career 9-2. While nobody truly wants Hardy to win, he was picked by all but four writers.

Long Islander Gregor Gillespie looks to continue his great run against Yancy Medeiros. Gillespie is 12-0 with five of those fights coming in the UFC, finishing the last four. Medeiros is back at lightweight after a run a welterweight in which he won his first three fights, then was knocked out by Donald Cerrone. Gillespie was picked by 22 of 23 writers.

Perennial flyweight contender Joseph Benavidez takes on Dustin Ortiz, who has put on the best performances of his career recently. Benavidez was 12-2 in the Octagon with his only losses to the former champion Demetrious Johnson before falling to Sergio Pettis. Benavidez bounced back with a win over Alex Perez in the first round in his last appearance. Ortiz had a rough 5-5 start to his UFC career, but has turned things around with three straight wins including a pair of first-round knockouts. Benavidez was picked by 19 of the 23 writers

Paige VanZant goes for her first win at flyweight against Rachael Ostovich. After going 4-2 at strawweight with the losses coming against top 115ers Michelle Waterson and Rose Namajunas, PVZ moved up to flyweight, where she was defeated by Jessica-Rose Clark. Ostovich has alternated wins and losses in her last six fights and stayed in this bout despite being the victim of a domestic violence incident in the leadup. PVZ earned a 17-6 majority of the picks.

Opening up the main card of UFC Brooklyn is light heavyweight veteran Glover Teixeira against relative newcomer Karl Roberson. After a great 5-0 start to his Octagon career, Teixeira was defeated in a title fight against Jon Jones. The Brazilian is 5-4 since the title fight, losing to Corey Anderson in his last appearance. Roberson entered the UFC through the Tuesday Night Contender Series and is 2-1 in the Octagon thus far, coming off an impressive victory over Jack Marshman. Like VanZant, Teixeira also received 17 picks of 23.