A lightweight scrap between Brandon Girtz and Pedro Carvalho is the latest addition to Bellator 215 in February.

Having recently re-signed with Bellator MMA, lightweight Brandon Girtz isn’t wasting any time getting back to work. On Tuesday, Cageside Press confirmed with Bellator officials that Girtz would take on SBG Ireland’s Pedro Carvalho at Bellator 215 next month, after early reports by FloCombat and Ireland’s OfftheBall. The February show is the first of back-to-back events in mid-February at the Mohegan Sun Arena in Uncasville, CT.

Girtz (15-8) is currently mired in the worst run of his career, having gone 1-4 in his last five fights dating back to 2016. Always an exciting fighter to watch, however, Girtz has faced some tough competition in that stretch, losing to Michael Chandler, Derek Campos, Adam Piccolotti, and Fernando Gonzalez. The bright spot in that slump came against Luka Jelcic, who Girtz knocked out at Bellator 190 in 2017.

After fighting just once in 2018, he’ll look to turn things around this year, starting with Carvalho (9-3). The Portuguese 23-year old has won both his Bellator MMA bouts to date, most recently submitting Luca Vitali at Bellator 211. Carvalho is currently on a four fight winning streak.

Bellator 215 takes place Friday, February 15 at the Mohegan Sun Arean in Uncasville, CT. A heavyweight slugfest between Matt Mitrione and Sergei Kharitonov is scheduled to headline the card. One day later at the same venue, Michael Page vs. Paul Daley tops Bellator 216. 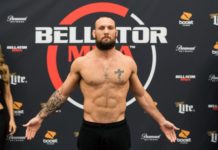 Bellator 239’s Brandon Girtz: “I’m not playing pitter-patter, I’m going out there for the kill.”