UFC flyweight and former Invicta FC champ Jennifer Maia is the latest casualty of a tainted supplement under the UFC Anti-Doping Program.

On Tuesday, the U.S. Anti-Doping Agency announced that UFC flyweight Jennifer Maia had been handed out a six month suspension, following a positive drug test stemming from a tainted supplement. The Brazilian fighter tested positive for furosemide, hydrochlorothiazide, chlorothiazide, and the thiazide metabolite 4-amino-6-chloro-1,3-benzenedisulfonamide (ACB), after an out-of-competition test administered on August 16, 2018.

Per Tuesday’s release, the culprit behind the failed doping test was a dietary supplement that contained substances not listed on the label. Despite being unaware of the contamination, Maia (15-5-1), a former Invicta FC flyweight champion, still draws a suspension as athletes are responsible for any substances going into their body. USADA has been a frequent critic of supplement use in general.

During an investigation into the circumstances of her case, opened and sealed containers of a dietary supplement she was using at the time of the August 16, 2018 sample collection, and that she declared on her doping control form, were sent to the WADA-accredited laboratory in Brazil for analysis. Although no prohibited substances were listed on the supplement label, the analysis revealed that both contained the prohibited substances for which Maia tested positive. Accordingly, this product has been added to the High Risk List of supplements maintained on USADA’s online dietary supplement safety education and awareness resource – Supplement 411 (www.Supplement411.org). Further, USADA reminds athletes that dietary supplement products marketed for weight loss carry significant risk to contain prohibited prescription medications, such as diuretics.

Under the UFC Anti-Doping Policy, as well as the World Anti-Doping Code, the determination that an athlete’s positive test was caused by a contaminated product may result in a reduced sanction. The sanction for a doping offense resulting from the use of a contaminated product ranges from a reprimand and no period of ineligibility to a two-year period of ineligibility.

Maia’s suspension is backdated to August 31, 2018, when she was provisionally suspended following the positive drug test. 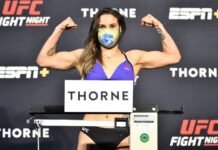