Eduardo Dantas returns to action at Bellator 215 in February, taking on Manny Vasquez.

Former Bellator bantamweight champ Eduardo Dantas will be back in the cage in February. First reported by MMA Fighting, Dantas is expected to face Manny Vasquez at Bellator 215 in Connecticut, the first of back-to-back shows in Uncasville, CT. It will be the first fight back for Dantas since he suffered a leg injury at Bellator 202 in July that later required surgery.

In fact, that Bellator 202 fight against Michael McDonald ended badly for both men. McDonald, who won the bout, suffered a hand injury (the latest in a string of broken hands for ‘Mayday’) that would lead to his retirement. Dantas, meanwhile, sustained a broken fibula as well as ligament damage. However, it looks like the Brazilian is healed up. Dantas (20-6) will be looking to snap a two-fight losing streak at Bellator 215 when he meets Vasquez.

Manny Vasquez (12-3) is 2-1 in his last three bouts, including his lone win under the Bellator banner, against Nate Williams at Bellator 175. Since then, he took a stab at Dana White’s Tuesday Night Contender Series, losing to Joby Sanchez on the show. He bounced back with a win over Shane West at Cage Aggression 21 last March.

Bellator 215 goes down at the Mohegan Sun Arena in Uncasville on February 15, 2019. The card is topped by Matt Mitrione vs. Sergei Kharitonov in heavyweight action. One night later, Bellator 216 will see Paul Daley and Michael Page finally meet, at the very same venue. 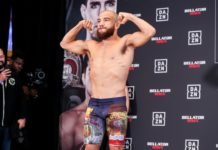 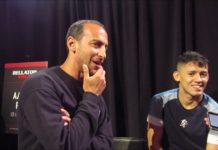