Frank Mir was looking for his first win in Bellator MMA on Friday at Bellator 212, but Javy Ayala had other ideas.

Bounced from the World Heavyweight Grand Prix by Fedor Emelianenko, former UFC heavyweight champ Frank Mir was back in action Friday night. At Bellator 212 in Honolulu, Hawaii, Mir was looking for his first win in the promotion. Opposite him, Javy Ayala, who had fought some of the organization’s best, and who held a knockout win over Sergei Kharitonov.

As the action got underway, Ayala fired first, with Mir clamping on with overhooks but being pushed back to the fence. Mir would break free, and move back to center, looking for and eventually scoring the takedown. In half guard, he worked on softening Ayala up with punches to the body, then looked to isolate an arm.  An early kimura attempt didn’t last, however, but Mir remained in the driver’s seat. As time wore on Mir would add some elbows, while Ayala punched from the bottom before scrambling free with a minute remaining. However a trip by Mir took them back down, but without enough time for Mir to make anything happen.

Javy Ayala went on the attack early in round two, but the veteran Mir quickly had him to the canvas. To Ayala’s credit, he was back on his feet in mere seconds, but he was going to need to find a way to stay there. Mir, however, was showing some damage after a close exchange. Even a high kick landed for Ayala. Mir would eat another standing elbow, then drop down looking for a single leg, however out of position, he opened himself up to some heavy punches to the ribs, and more as he worked back to his feet. Short elbows and body shots were tenderizing Mir. However off the break Mir landed a knee, then clipped Ayala with a punch! They traded a moment, before Mir changed levels for a takedown.

Ayala, however, stayed standing. Stayed on the bloodied Mir. And after eating several more shots, Mir tapped out! After the finish, it appeared Mir may have suffered some damage to the mouth, as his mouth piece had popped out earlier in the exchange. 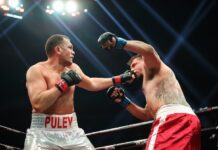