After a couple of split decisions opened the Bellator 212 televised card on Paramount, Team Bodyshop star A.J. McKee made no mistake, finishing Daniel Crawford with an anaconda choke in the first round.

Bellator star A.J. McKee’s rise through the ranks has been nothing short of impressive. A second generation fighter (son of lower weight class pioneer Antonio McKee), A.J. has proven unstoppable through twelve fights to date. Incredibly, all twelve have come under the Bellator MMA banner. At Bellator 212 in Honolulu, Hawaii on Friday, McKee had one mission: make it lucky number thirteen.

Standing in his way, Daniel Crawford. The British featherweight entered the night off a loss in his promotional debut at Bellator 200, but there was zero question he’d be motivated to play spoiler in Hawaii against McKee.

If nothing else, the former BAMMA champ Crawford showed he was not afraid to go after McKee early. Yet before long it was McKee working on a takedown, pressing Crawford into the fence. Soon enough, he’d get it, with half the round remaining. Crawford was tight to the fence, and quickly looked for a leg lock that McKee scrambled free from. McKee then sunk in an anaconda choke, an within seconds, Daniel Crawford was tapping.

Another big win for McKee, his thirteenth, the longest winning streak in the promotion’s history. He’ll be looking for a big step up — but who will answer the call? 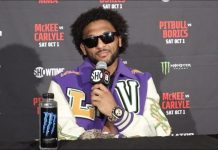