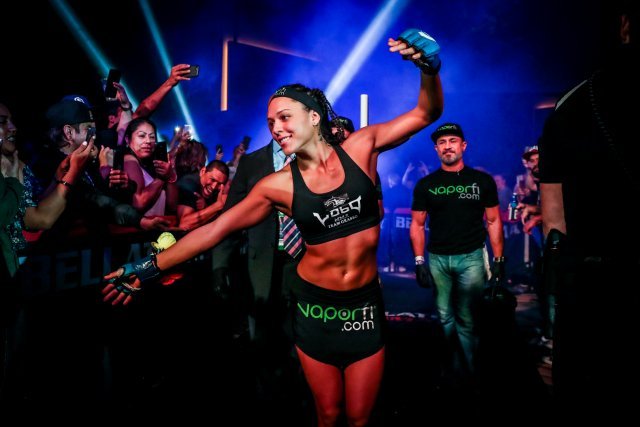 Flyweight contender Alejandra Lara discusses what life has been like since her breakout fight for the Bellator title last June, how she began in MMA, and her upcoming fight with Juliana Velasquez.

Much of the MMA world wasn’t familiar with Colombia’s Alejandra Lara before she signed to face Bellator’s popular flyweight champion Ilima Macfarlane last June. But after watching her display of heart and grit, it was clear that the flyweight landscape had an exciting new player added to the mix.

“I’m extremely proud to be representing my country. There are just a few men and women from here who are in the sport on this level and I was able to show the world who we are and what we’re capable of. It is an ongoing process and we aren’t a finished product. We have to continue working. I know that people who watch my fights project onto them goals of achieving greater things and that’s what I’m working towards also.”

The loss to Macfarlane was only the second of Lara’s career and now some time removed from the match, the 23-year-old put the entire experience into perspective.

“I felt very satisfied with the fight. I learned a lot of things in terms of the experience that I needed. Obviously, I noticed some of my mistakes and the details that are important, but besides that, I was able to display some of the things I do well in different areas and possibly set up myself for a rematch in the future.”

A self-described black sheep in her family, Lara’s attraction to martial arts is one that developed over time as a child.

“When I was young, I was super active and my mom used to get me involved in different sports. At four years old, I practiced karate and that was the only sport I did related to MMA. When I was 12, I went back to karate and discovered that I really liked contact sports. I entered karate tournaments and won them. I practiced kung-fu and won competitions there also. That’s what I was doing when I was offered to fight in the cage. I knew it was similar to what I was doing so it was a natural process to just stay in it.”

One of the signatures of Lara’s Instagram is her videos displaying her skills as an aerial dancer.

“I have always had many interests and I got involved in dance when I was in university. I was inclined to learn about dance. It was something that I did daily to maintain flexibility to balance with my strength and explosiveness. I loved studying dance in college because I was moving and I like the artistic part of it. I believe that the body is a complex machine whose functions you have to understand in order for the complete organ to work.”

Indeed, Lara’s flexibility is one of the most noticeable parts of her game. Her fight with Sabina Mazo is one of the best displays of dexterity you’ll ever see in women’s MMA and even Bellator champion Macfarlane had to make adjustments to her armbar before getting the finish back in June.

The truth, as it is for many fighters, Lara had to make a choice. She had to decide if she was going to make training her main priority or to let it go in lieu of something else. “I worked in a musical theater where I learned about music and we put on concerts, but I had to choose between competing or continuing to sing. Life kept pushing me toward fighting since I was always been pretty active and had a lot of energy which is important for this sport.”

Leading up to her match with Macfarlane, one of the themes that kept coming up from Lara was the desire to represent not just Colombia but Latin America in general on MMA’s bigger stages. It’s well-known that countries like the United States are hotbeds for MMA fighters from around the world as there are abundant numbers of high-level teams with high-level athletes to train with compared to their native lands. But Lara feels differently, and she believes that attaining championship gold in a major promotion is possible with the resources she has in Latin America.

“What happens is we have a lot of talent in different countries. If we unite, we can take advantage of each other’s knowledge to help each other. During this camp, it has been important to spar with girls that are at a high level that are requiring the best of you. Having people on your team with the same passion, the same objectives, the focus, just that competition at a higher level. If my team offers me these things, taking advantage of it is just as important as a fighter than going to different places to learn different techniques for different scenarios. You can always learn something new. Regardless of where you are at.”

As Bellator continues to find and develop flyweight talent like Kristina Williams and Kate Jackson, Lara is close to another title shot should she overcome her upcoming opponent: undefeated Brazilian Juliana Velasquez. Like Lara, Velasquez may be new to fans in the US but has a record that even the flyweight champion has noticed.

Lara does not invest too much into a title shot with a victory, aware that the business of MMA can sometimes force even successful fighters to be patient when it comes to competing for the belt.

“I think it depends on my performance. I want to demonstrate what I’ve been working on in training. I feel stronger than ever. I believe this fight will define a lot of things but it’s not just about whether you win or lose but how you win and the performance you have.”

“Azul” predicts that Macfarlane will retain the title against Valerie Letourneau on Saturday, but logic says that Lara would be closer to a title shot with Letourneau holding the belt compared to Bellator granting her a rematch with Macfarlane so soon.

“I think it’s possible. But in reality, it doesn’t matter. Whether I fight one before and the other after. I think it would be a good show against either girl.”

On the undefeated Velasquez, Lara claims that the lack of tape to study her opponent doesn’t affect how she plans to approach the fight.

“I think she is a good fighter. We have a similar record. We need to show her something a little different than what she’s seen. In each fight, we mature and we can show something new. In this fight anything can happen so we don’t know what to expect. I haven’t seen many of her fights. The goal is to go full throttle and see what happens.”

So what is next for Alejandra Lara? The budding superstar whose magnetic personality is matched only by her incredible physical talents, whom at 23 years old appears to have the world at her feet. In her own words, it’s the fact that the best is yet to come.

“I think everything is a process and everyone’s road is different. When I started, I didn’t have a lot to start my career out in Colombia. What helped me to continue in this sport was a phone call to come and train and that’s where I got started. I stayed focused even when all the fights weren’t happening for me immediately. I knew that something big would eventually come my way and that’s what happened. My career is just starting out but I’m doing what I love to do and I believe greater things are going to happen.”