Tom Lawlor is in the co-main event of Golden Boy MMA’s Liddell vs. Ortiz 3 on Saturday, and told Cageside Press that he knows his opponent is young and hungry — but he’s hungrier.

When it comes to Deron Winn, Tom Lawlor has a good idea of what to expect. He’s facing the amateur wrestler this weekend at Liddell vs. Ortiz 3, under the Golden Boy banner. It’s Lawlor’s first fight since 2016. “No surprises. He’s one of the top amateur wrestlers in the country,” Lawlor said. With that in mind, he’s expecting the take down, and barring that, “he’s going to throw some big punches before he tries to take me down.”

“It’s a cut and dry game plan as far as I look at it,” he said of Winn. “I don’t think he’s going to come in with anything I’m not expecting. I’ve seen it all, he hasn’t. He’s relatively young in his career.”

While his opponent is young and hungry, Lawlor told Cageside Press that “I’m hungrier. I guaran-damn-tee you that.”

Lawlor took a few potshots at Winn ahead of the fight, a bit of page out of his pro wrestling career. “Everybody knows the deal, professional wrestling is…” he said then paused. “It’s fixed.” Breaking news, right? “It’s pre-determined. That doesn’t mean it’s not an athletic contest in and of itself.” Breaking Kayfabe. Yikes.

As Lawlor pointed out, he’s been out of the MMA realm for a while. “I’ve been training the entire time, I’ve been getting ready for a fight, it just so happens it’s going to be here for Golden Boy.” But while he’s been gone, “luckily I’ve had a lot of support from the professional wrestling community,” he explained. He’s been doing shows, staying active, and his self-promotion ahead of his MMA return is a nod to his second career.

“I want people to know that I’ve been in that world, so those people who supported me for the past two years have something to look forward to,” he said. Plus, having done his research, he recognizes that the two professions have long been intertwined, from Brazil to Japan.

In fact, he found wrestling through MMA. Now, he’ll return to his original field, on November 24 in Los Angeles, and look to get his career in fighting back on track. 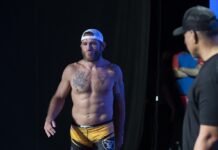