After loading up his car and making the move to Las Vegas in search of more seasoned training partners, Misha Cirkunov returns at UFC Moncton — and would love a rematch with main event fighter Volkan Oezdemir.

Moncton, NB — Misha Cirkunov returns at UFC Moncton, and when he does so, the recently relocated fighter will look to snap a two-fight losing streak in the UFC’s light heavyweight division. His last two fights, mind you, came against some formidable opponents: two ex-title challengers in Volkan Oezdemir and Glover Teixeira. Still, the pair both stopped Cirkunov, a Latvian longtime resident of Toronto, prompting him to make the move to Las Vegas to further his training. And at least one of those fights, the Oezdemir loss, he’d very much like to get back.

Whether Cirkunov’s move pays off, we’ll know Saturday night. He’s facing wrestler Patrick Cummins that night. The light heavyweight, however, told Cageside Press and other media outlets Thursday at the UFC Moncton media day that it was just “good to be back. Feel awesome, can’t wait for the fight. A lot of change has been made. I’m just excited to be back.”

Being back comes after his big move. “About five months ago I packed all my stuff, took my car and just drove down to Las Vegas,” Cirkunov explained. “I’ve been there since then, just training at Xtreme Couture Las Vegas. I have new coaches, now I actually have coaches. I have great training partners.” Prior to that, Cirkunov had pretty much run things himself.

“Basically all the elements, whatever you can possibly have, they’ve been changed,” he said of how things are different after the move. “I feel really good, been in some good scrimmages with high level guys elite guys kind of in a similar position as I am. It feels good to have a strong team behind [me], not just to support. To give advice, work on certain things, have different game plans. It feels great to be with a whole team of professionals.”

He had options. “I was looking at Florida and California, but I was also looking at the UFC PI [Performance Institute],” Cirkunov said. The UFC’s state of the art training facility opened its doors last year. “That’s another huge benefit that I thought I would receive, and I was 100% right about that. Coaches, trainers at the UFC PI are a completely different level than what I’m used to. I used to train with some good strength and conditioning people. But the whole staff at the UFC PI are just incredible.”

Most important is the professionalism and passion. “Everyone is on an elite level, everyone is extremely passionate about what they do,” said Cirkunov, “and you feel that in training. I feel like I have a really good relationship there now with coaches because they see me work and train hard.”

The end result is a fighter who feels like “I improved in every single area there is possible in a fight.” Which makes Misha Cirkunov “really excited to go in the cage and get my hand raised.”

Misha’s last outing came last December, at UFC on FOX 26 in Winnipeg. While he had some opportunities to get back in the octagon sooner, Cirkunov felt he needed a solid training camp after the strenuous move he’d just gone through. So rather than jumping on the first opportunity afforded him, he waited for the right date. That turned out to be UFC Moncton. It doesn’t hurt that “I actually have many friends in Moncton as well,” Cirkunov admitted.

And if he’s not injured after Saturday, UFC 231 in Toronto would be a date that could interest him.

As for the biggest contrast between Toronto and Las Vegas, it boils down to bodies. “The biggest contrast is training partners,” Cirkunov told Cageside Press at Thursday’s UFC Moncton media day. “That’s the biggest thing. In Toronto, nobody can put me down. I’m usually the guy that is always taking people down and beating everyone up. I kind of got used to this.”

Then, when the shoe was on the other foot, “the first time it happened in a fight, I was a little bit panicky or whatever.” Training in Las Vegas with Xtreme Couture, “I’ve been in a lot of good, bad, any kind of positions in training. I feel like I progressed big time. It’s not like I was in bad shape before, I just needed the right polishing.”

Asked what he’d learned from his recent losses, it was clear that one fight in particular doesn’t sit well with Cirkunov. “The main thing, the fight with Volkan, I still think is one of those fights that’s just like pure luck,” he told us. “I will raise back up, and I would love to challenge him one more time. If anything, when you do get a rematch, it’s one of those fights where it just happened really quick.”

Cirkunov is confident he can get that one back, however. “I feel like we’ll dance again for sure.” 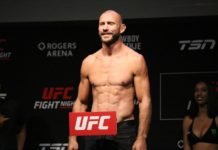 UFC Vancouver Aftermath: What’s Next For the Key Players? 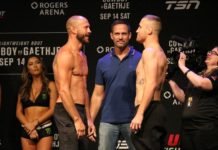 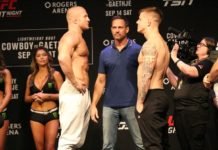